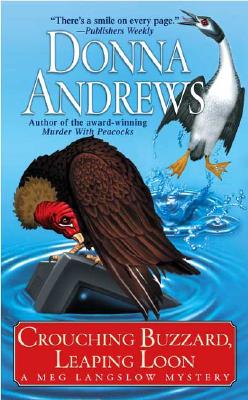 By Donna Andrews
Email or call for price.
Backordered

Poor Meg Langslow. She's blessed in so many ways. Michael, her boyfriend, is a handsome, delightful heartthrob who adores her. She's a successful blacksmith, known for her artistic wrought-iron creations. But somehow Meg's road to contentment is more rutted and filled with potholes than seems fair.

There are Michael's and Meg's doting but demanding mothers, for a start. And then there's the fruitless hunt for a place big enough for the couple to live together. And a succession of crises brought on by the well-meaning but utterly wacky demands of her friends and family. Demands that Meg has a hard time refusing---which is why she's tending the switchboard of Mutant Wizards, where her brother's computer games are created, and handling all the office management problems that no one else bothers with. For companionship, besides a crew of eccentric techies, she has a buzzard with one wing---who she must feed frozen mice thawed in the office microwave---and Michael's mother's nightmare dog. Not to mention the psychotherapists who refuse to give up their lease on half of the office space, and whose conflicting therapies cause continuing dissension. This is not what Meg had in mind when she agreed to help her brother move his staff to new offices.

In fact, the atmosphere is so consistently loony that the office mail cart makes several passes through the reception room, with the office practical joker lying on top of it pretending to be dead, before Meg realizes that he's become the victim of someone who wasn't joking at all. He's been murdered for real.

Donna Andrews's debut book, "Murder with Peacocks," won the St. Martin's Malice Domestic best first novel contest and reaped a harvest of other honors as well. This is the fourth book in the Meg Langslow series, which features the intrepid Meg and her cast of oddball relatives. Their capers are a lighthearted joy to read.

Donna Andrews is the author of the Meg Langslow mysteries, including "Stork Raving Mad" and "Swan for the Money." She has won the Agatha, Anthony, and Barry awards, a "Romantic Times" award for best first novel, and two Lefty and two Toby Bromberg Awards for funniest mystery. When not writing fiction, Andrews is a self-confessed nerd, rarely found away from her computer, unless she's messing in the garden. She lives in Reston, Virginia.

"There's a smile on every page."--Publishers Weekly

"This may be the funniest installment of Andrews' wonderfully wacky series yet."--Romantic Times