Bratfest at Tiffany's (The Clique #9) (Paperback) 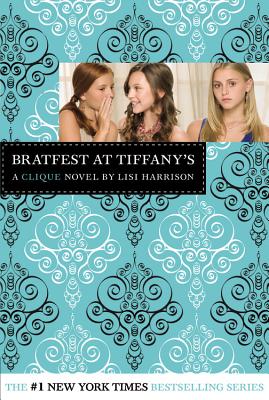 This is book number 9 in the The Clique series.

Massie Block: The Briarwood boys have invaded OCD and are taking over everything. Worse, the soccer boys have become so popular that the Pretty Committee's alpha status is in serious jeopardy. So Massie lays out a New Year-New Pretty Committee rule: Anyone caught crushing on a boy will be thrown out of the NPC-forever. But will she be able to follow her own decree when she sees that Derrington has ditched his shorts-obsession in favor of ah-dorable jeans?

Alicia Rivera: Is the opposite of onboard with the boyfast. Her crush, the Ralph Lauren-luh-ving Josh Hotz, is more irresistible than crème brûlée fro-yo. But is he worth losing her spot in the NPC? And taking on the wrath of Massie?

Dylan Marvil: Is so ready for the boyfast. She's straightened her unruly red hair and permanently pressed boys out of her life. If only she could do the same with curly fries and caramel popcorn.

Kristen Gregory: Has traded her sporty-chic Pumas for Billabong board shorts and a shark tooth necklace. She claims she's sworn off boy-crushes, so what's with her Blue Crush makeover?

Claire Lyons: Spent all summer thinking about Cam's one blue eye and one green eye. But now he's moved on to a new girl faster than you can say cuh-yutest couple. At least Claire finally has a secure spot in the NPC-unless jealousy-flirting breaks the boyfast. . . .

The Clique: The only thing harder than getting in is staying in.

Lisi Harrison is the author of The Clique, Alphas and Monster High series. She was the Senior Director of Production Development at MTV and Head Writer for MTV Production. Lisi is currently pretending to write her next novel.