My Little Phony (The Clique #13) (Paperback) 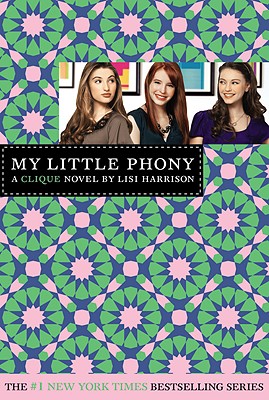 By Lisi Harrison
$9.99
Backordered or Out of Print

This is book number 13 in the The Clique series.

Sugar, spice, and everything lice.

Massie Block: The holidays are just around the corner, and the only thing Massie doesn't want for Christmas is a lip-kiss from her ninth-grade crush, Landon. Not that she'd ever admit it, but she's nervous! To distract herself, Massie focuses on getting revenge on Claire for ditching the Pretty Committee. But when the plan to bug her ex-BFF backfires big-time, she may find herself headed for a Merry Kissmass-whether she likes it or not.

Alicia Rivera: Promised her parents she wouldn't shop at awl between Thanksgiving and Christmas. Her reward? An all-expenses-paid trip to the Spanish Riviera. But what happens when she sees the cuh-yutest pair of Ralph Lauren sunglasses? No pain, no Spain.

Kristen Gregory: Is sick of being the only poor girl in Westchester. But misery loves company, and maybe, just maybe, she won't be the only broke member of the Pretty Committee for long. . . .

Claire Lyons: When Massie scares off her new drama friends with a fake-lice scare, Claire decides she's done letting Massie bully her. The alpha may have exterminated Claire's social life, but what goes around comes around. The raid is on, and it won't be over until the fat ladybug sings.

The Clique . . . the only thing harder than getting in is staying in.

Lisi Harrison is the author of The Clique, Alphas and Monster High series. She was the Senior Director of Production Development at MTV and Head Writer for MTV Production. Lisi is currently pretending to write her next novel.