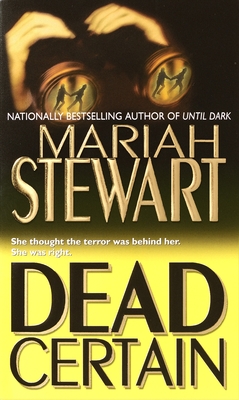 By Mariah Stewart
$8.99
Backordered or Out of Print

With her stalker captured, antiques dealer Amanda Crosby can finally sleep at night. Having worked hard to put the nightmare behind her, Amanda has vowed to never be a victim again. But when her business partner, Derek England, is found with a bullet through the back of his head just hours after she left an incriminating message on his voice mail, Amanda finds herself in danger of becoming a victim of another sort.

All the evidence points to Amanda as Derek’s killer, and Chief of Police Sean Mercer is building the case against her. But when another of her colleagues is found brutally murdered, it’s obvious that someone other than Amanda is behind the killings. Suddenly Amanda is a target once again, as a diabolical killer circles ever closer—and the only thing that stands between her and becoming the third and final victim is the man who had tried to put her behind bars. . . .

Mariah Stewart is the bestselling author of numerous novels and several novellas. A RITA finalist for romantic suspense, she is the recipient of the Award of Excellence for contemporary romance, a RIO (Reviewers International) Awards honoring excellence in women’s fiction, a Reviewers Choice Award from Romantic Times magazine, and a three-time recipient of the Golden Leaf Award for contemporary romance. A native of Hightstown, New Jersey, she lives with her husband, two daughters, and two rambunctious golden retrievers in a century-old Victorian home. She is a member of the Valley Forge Romance Writers, New Jersey Romance Writers, and the Romance Writers of America.