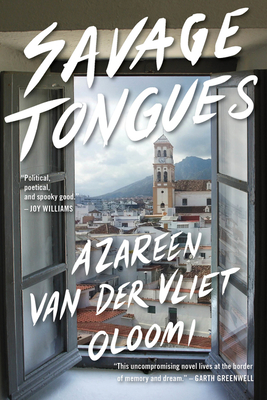 A new novel by PEN/Faulkner Award winner Azareen Van der Vliet Oloomi—“if you don’t know this name yet, you should” (Entertainment Weekly)—about a young woman caught in an affair with a much older man, a personal and political exploration of desire, power, and human connection.

It’s summer when Arezu, an Iranian American teenager, goes to Spain to meet her estranged father at an apartment he owns there. He never shows up, instead sending her a weekly allowance, care of his step-nephew, Omar, a forty-year-old Lebanese man. As the weeks progress, Arezu is drawn into a mercurial, charged, and ultimately catastrophic affair with Omar, a relationship that shatters her just at the cusp of adulthood.

Two decades later, Arezu inherits the apartment. She returns with her best friend, Ellie, an Israeli-American scholar devoted to the Palestinian cause, to excavate the place and finally put to words a trauma she’s long held in silence. Together, she and Ellie catalog the questions of agency, sexuality, displacement, and erasure that surface as Arezu confronts the ghosts of that summer, crafting between them a story that spans continents and centuries.

Equal parts Marguerite Duras and Shirley Jackson, Rachel Cusk and Clarice Lispector, Savage Tongues is a compulsive, unsettling, and bravely observed exploration of violence and eroticism, haunting and healing, the profound intimacy born of the deepest pain, and the life-long search for healing.

AZAREEN VAN DER VLIET OLOOMI is the author of the novels Savage Tongues, Call Me Zebra, and Fra Keeler and the director of the MFA Program in Creative Writing at the University of Notre Dame. She is a National Book Foundation “5 Under 35” honoree and the winner of a 2019 PEN/Faulkner Award, a John Gardner Award, and a 2015 Whiting Award, as well as the recipient of a Fulbright Fellowship and residency fellowships from MacDowell and Ledig House. Her work has appeared in the New York Times, the Paris Review, Guernica, Granta, Bomb, and elsewhere. She lives in Chicago and is the founder of Literatures of Annihilation, Exile and Resistance, a lecture series on the global Middle East that focuses on literature shaped by colonialism, military domination, and state-sanctioned violence.

"Not many writers can convey both great beauty and horror at the same time, but in Savage Tongues, Azareen Van der Vliet Oloomi does so deftly...Oloomi works through questions of sex, friendship, trauma, and the obliteration of the self, with an inventive approach to time, setting, and character...Oloomi’s sentences, whether evoking pain or pleasure, are electric, filled with life. If I’m honest, when I was reading, I often wished I had written them. The imagery is filmic, and sometimes piercing."  — Amina Cain, The Paris Review

"A novel of ideas...Though steeped in sex and haunted by fleshy frights...their exorcism is mostly a matter of language."  — Washington Post

"Azareen Van der Vliet Oloomi's stunning new novel is a hauntingly beautiful depiction of the way past traumas grip at our insides, threatening to tear us apart years after we've experienced them...Savage Tongues is rigorous in its exploration of the effects that violence and corruption have on our conception of ourselves."   — Refinery 29

"This is a pulls-no-punches look at abandonment, ownership, trauma, and the convergence of political and personal pain. It is also a touching ode to friendship, a partial salve for these wounds." — Literary Hub

"Written with the intensity of early Duras and Ferrante’s Days of Abandonment...With the help of a dear friend, Arezu excavates and puts words to her past trauma in this novel about love, friendship, identity, and displacement." — The Millions

“Azareen Van der Vliet Oloomi’s Savage Tongues is an international novel careful to record the beauty of the natural world while also chronicling the harm people do to one another in this world. Van der Vliet Oloomi wants to know what we can expect of our families—our fathers, our lovers—when we are the same people who will wage war and destroy our planet in order to do so. This book is relentless in the best way."   — Jericho Brown, Pulitzer Prize-winning author of The Tradition

“Against the gorgeous, punishing landscapes of Andalusia, the narrator of Savage Tongues relentlessly and movingly anatomizes the links between violence—both personal and systemic—and desire. This uncompromising novel lives at the border of memory and dream, restlessly seeking a logic that can transform cruelty into love.” — Garth Greenwell, author of Cleanness and What Belongs to You

"In Savage Tongues the immensely gifted Van der Vliet Oloomi describes a woman walking the razor thin line between memory and madness as she tries to rescue her younger self. Happily Arezu does not walk the line alone. This vivid account of the haunting nature of trauma is also a wonderful testimonial to friendship. A resonant and powerful novel." — Margot Livesey, New York Times-bestselling author of The Flight of Gemma Hardy and The Boy in the Field

"Savage Tongues touches all the bases—identity, sex, power, youth and age, the present and the past—and knocks it out of the park. Azareen Van der Vliet Oloomi is our woke Marguerite Duras." — Francine Prose, author of Lovers at the Chameleon Club and Mister Monkey

"Azareen Van Der Vliet Oloomi is no stranger to accolades...And, boy oh boy, does she deserve every one of them. I will be anticipating anything she writes...Savage Tongues has drawn comparisons to Shirley Jackson and Samanta Schweblin for the way it keeps you suspended in a state of discomfort and hauntingly depicts a shattering of the self."  — Literary Hub

"The past bears with it a harrowing capacity to disrupt lives...[Savage Tongues] follows one woman’s reckoning with her own past, and the larger context that suffuses the history she’s tried to leave behind." — vol. 1 Brooklyn

"In Savage Tongues, Van der Vliet Oloomi establishes herself as a skilled cartographer of trauma. With a remarkably clear vision and dynamic, colorful prose, she takes us along on her journey into the deepest recesses of an embattled mind. This is a book for those who expect from the novel far more than a story." — Amir Ahmadi Arian, author of Then The Fish Swallowed Him

“Savage Tongues breathes fresh life into ancient wounds, erasures, and annihilations. By mining transgressions—historical, sexual, bodily, and territorial—Van der Vliet Oloomi delivers a courageous book, as searing and terrifying as it is healing.”  — Neda Maghbouleh, author of The Limits of Whiteness

"The boldness and bitter confidence of Oloomi’s writing, utterly immersed in language yet grasping something un-languageable, felt like a reminder of how powerful a text can be when it inhabits itself wholly, in all its contradictions and capaciousness." — Alexandra Kleeman, author of Something New Under the Sun