Fanny Hill: or, Memoirs of a Woman of Pleasure (Modern Library Classics) (Paperback) 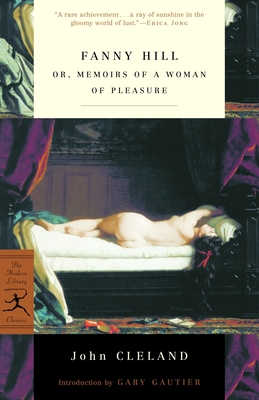 Fanny Hill, shrouded in controversy for most of its more than 250-year life, and banned from publication in the United States until 1966, was once considered immoral and without literary merit, even earning its author a jail sentence for obscenity.

The tale of a naïve young prostitute in bawdy eighteenth-century London who slowly rises to respectability, the novel–and its popularity–endured many bannings and critics, and today Fanny Hill is considered an important piece of political parody and sexual philosophy on par with French libertine novels.

This uncensored version is set from the 1749 edition and includes commentary by Charles Rembar, the lawyer who defended the novel in the 1966 U.S. Supreme Court case, and newly commissioned notes.

Gary Gautier is a professor at the University of Colorado and the author of the book Landed Patriarchy in Fielding’s Novels: Fictional Landscapes, Fictional Genders.

"A rare achievement . . . a ray of sunshine in the gloomy world of lust."
--Erica Jong