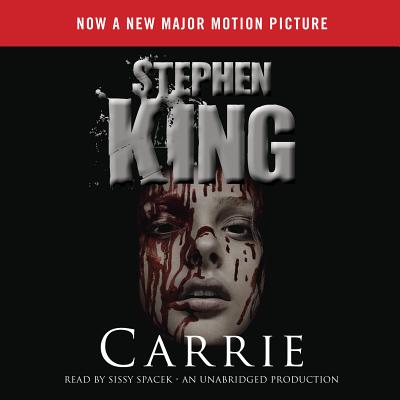 By Stephen King, Sissy Spacek (Read by)
$19.99
Email or call for price

Stephen King's legendary debut novel about a teenage outcast and the revenge she enacts on her classmates.

Carrie White may have been unfashionable and unpopular, but she had a gift. Carrie could make things move by concentrating on them. A candle would fall. A door would lock. This was her power and her sin. Then, an act of kindness, as spontaneous as the vicious taunts of her classmates, offered Carrie a chance to be normal and go to her senior prom. But another act--of ferocious cruelty--turned her gift into a weapon of horror and destruction that her classmates would never forget.

Stephen King is the author of more than fifty books, all of them worldwide bestsellers. Among his most recent are Doctor Sleep; Joyland; 11/22/63; Full Dark, No Stars; Under the Dome; Just After Sunset; Duma Key; and the latest novel in the Dark Tower saga: The Wind Through the Keyhole. His acclaimed nonfiction book, On Writing, is also a bestseller. He was the recipient of the 2003 National Book Foundation Medal for Distinguished Contribution to American Letters, and in 2007, he received the Grand Master Award from the Mystery Writers of America. He lives in Maine with his wife, novelist Tabitha King.