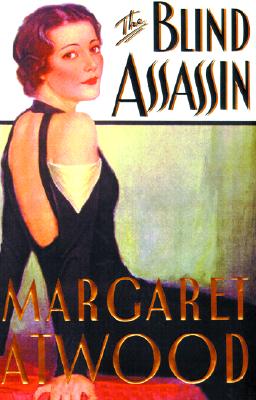 By Margaret Atwood
$26.00
Backordered or Out of Print

Margaret Atwood takes the art of storytelling to new heights in a dazzling new novel that unfolds layer by astonishing layer and concludes in a brilliant and wonderfully satisfying twist.

For the past twenty-five years, Margaret Atwood has written works of striking originality and imagination. In The Blind Assassin, she stretches the limits of her accomplishments as never before, creating a novel that is entertaining and profoundly serious.

The novel opens with these simple, resonant words: "Ten days after the war ended, my sister drove a car off the bridge." They are spoken by Iris, whose terse account of her sister Laura's death in 1945 is followed by an inquest report proclaiming the death accidental. But just as the reader expects to settle into Laura's story, Atwood introduces a novel-within-a- novel. Entitled The Blind Assassin, it is a science fiction story told by two unnamed lovers who meet in dingy backstreet rooms. When we return to Iris, it is through a 1947 newspaper article announcing the discovery of a sailboat carrying the dead body of her husband, a distinguished industrialist.

Told in a style that magnificently captures the colloquialisms and clichés of the 1930s and 1940s, The Blind Assassin is a richly layered and uniquely rewarding experience. The novel has many threads and a series of events that follow one another at a breathtaking pace. As everything comes together, readers will discover that the story Atwood is telling is not only what it seems to be--but, in fact, much more.

The Blind Assassin proves once again that Atwood is one of the most talented, daring, and exciting writers of our time. Like The Handmaid's Tale, it is destined to become a classic.

Margaret Atwood is the author of more than twenty-five books, including fiction, poetry, and essays. Her most recent work includes the novels Alias Grace and The Robber Bride and the collections Wilderness Tips and Good Bones and Simple Murders. She lives in Toronto.

“The first great novel of the new millennium.”
–Newsday

“Margaret Atwood is one of the most brilliant and unpredictable novelists alive.”
–Literary Review (U.K.)

“An example of a writer at the very peak of her performance.…As it delves into the kinds of relationships that can exist between men and women and the rich and poor, it becomes a compassionate and utterly honest book. It is profound and touching. It is to be treasured.”
–Edmonton Journal

“Atwood performs a spectacular sleight of hand, fashioning a bewitching, brilliantly layered story of how people see only what they wish to.”
–Entertainment Weekly

“Dazzling and entertaining.…”
–Globe and Mail

“The Blind Assassin is quite simply Atwood’s most emotional, yearning, heartfelt, sexy, and elegiac book ever.”
–Quill & Quire

“Atwood has never written with more flair and versatility than in this multidimensional novel. A brilliant accomplishment.”
–Sunday Times (U.K.)

“There is no presence more formidably protean than Margaret Atwood’s in Canadian culture.…[The Blind Assassin] will alternately charm and beguile its readers.”
–Winnipeg Free Press

“The Blind Assassin is the kind of story so full of intrigue and desperation that you take it to bed with you simply because you can’t bear to put it down.…It’s one thing to write an accomplished novel; it’s another entirely to spin a tale so brilliantly that the reader internalizes it.”
–Harper’s Bazaar

“Atwood is a dazzling storyteller with a distinctive voice and an ear attuned to irony.”
–London Free Press

“Margaret Atwood is one of the greatest writers alive.…A novel of luminous prose, scalpel-precise insights and fierce characters.…[The Blind Assassin] is so assured, so elegant and so incandescently intelligent, she casts her contemporaries in the shade.”
–Atlanta Journal-Constitution