The Other Lady Vanishes (Mass Market) 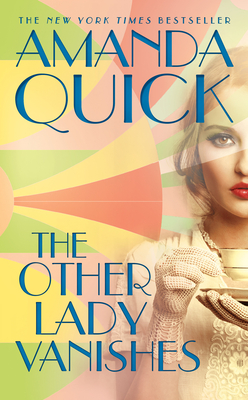 "Quick conjures up a celluloid world that will be catnip to fans of that era evoking the sensation it was plucked straight from the Warner Bros. vault."--Entertainment Weekly

The New York Times bestselling author of The Girl Who Knew Too Much sweeps readers back to 1930s California--where the most dazzling of illusions can't hide the darkest secrets...

After escaping from a private sanitarium, Adelaide Blake arrives in Burning Cove, California, desperate to start over.

Working at an herbal tea shop puts her on the radar of those who frequent the seaside resort town: Hollywood movers and shakers always in need of hangover cures and tonics. One such customer is Jake Truett, a recently widowed businessman in town for a therapeutic rest. But unbeknownst to Adelaide, his exhaustion is just a cover.

In Burning Cove, no one is who they seem. Behind facades of glamour and power hide drug dealers, gangsters, and grifters. Into this make-believe world comes psychic to the stars Madame Zolanda. Adelaide and Jake know better than to fall for her kind of con. But when the medium becomes a victim of her own dire prediction and is killed, they'll be drawn into a murky world of duplicity and misdirection.

Neither Adelaide or Jake can predict that in the shadowy underground they'll find connections to the woman Adelaide used to be--and uncover the specter of a killer who's been real all along...

Praise for The Other Lady Vanishes

“It feels like Quick found a script to one of those film noir delights and spun it into gold, so genuine is the atmosphere she crafts. Within a few chapters, you can’t escape the sensation that you’ve fallen back in time into a black-and-white picture rife with mystery, murder, and a chemistry that develops in spite of (or maybe because of) the mayhem around the two central lovers.”—Entertainment Weekly

Praise for The Girl Who Knew Too Much

“The action-packed plot is kick-started at page one...Quick has a great time with the 1930s Hollywood-glamour atmosphere.”—The Seattle Times

“There are fierce forces at play in every page of The Girl Who Knew Too Much, and you won’t be able to put down this captivating mystery until the last page is fervently turned. What’s not to love about a scandalous historical tale set in the glamorous years of 1930s Hollywood?”—Redbook

“Quick is often named as one of the inventors of the romantic mystery, and she writes the genre effortlessly—the love story and the mystery are beautifully intertwined here.”—The Washington Post

“A fun, spunky, read that contains plenty of simmering sexual chemistry, which will most definitely satiate the most ardent fans of Amanda Quick.”—New York Journal of Books

“A fascinating look into the bygone days of the glamorous era of Hollywood.”—Fresh Fiction

“All of the key ingredients—wit-infused writing, sharply etched characters, and plenty of simmering sexual chemistry—that readers have come to expect from Quick snap into perfect alignment in this stellar novel. Put that together with a plot that neatly marries high-stakes suspense and a glamorous, old Hollywood setting, and you have a blockbuster that will not only delight historical-romance readers but also entice historical-mystery fans to join in on the fun.”—Booklist (starred review)