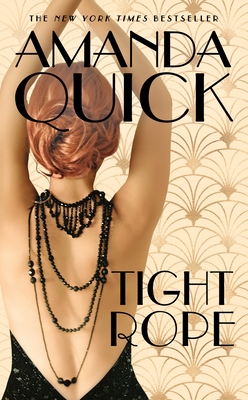 An unconventional woman and a man shrouded in mystery walk a tightrope of desire as they race against a killer to find a top secret invention in this New York Times bestselling novel from Amanda Quick.

Former trapeze artist Amalie Vaughn moved to Burning Cove to reinvent herself, but things are not going well. After spending her entire inheritance on a mansion with the intention of turning it into a bed-and-breakfast, she learns too late that the villa is said to be cursed. When the first guest, Dr. Norman Pickwell, is murdered by his robot invention during a sold-out demonstration, rumors circulate that the curse is real.

In the chaotic aftermath of the spectacle, Amalie watches as a stranger from the audience disappears behind the curtain. When Matthias Jones reappears, he is slipping a gun into a concealed holster. It looks like the gossip that is swirling around him is true—Matthias evidently does have connections to the criminal underworld.

Matthias is on the trail of a groundbreaking prototype cipher machine. He suspects that Pickwell stole the device and planned to sell it. But now Pickwell is dead and the machine has vanished. When Matthias’s investigation leads him to Amalie’s front door, the attraction between them is intense, but she knows it is also dangerous. Amalie and Matthias must decide if they can trust each other and the passion that binds them, because time is running out.

“Quick excels at developing complex plots that keep the reader guessing...This tangled novel will satisfy series fans and others looking for a bit of a challenge.”—Publishers Weekly

“With a multithreaded plot, quick-witted banter, and offbeat characters with a theatrical flair, Quick’s work returns to Burning Cove and another trip to the edgy, elegant Thirties.”—Library Journal (starred review)

"Witty, sexy and well-plotted, this Quick book is a quick fun read, highly entertaining for readers of romantic suspense."—Seattle Times

"Tightrope by Amanda Quick will have you on the edge of your seat from beginning to end and then author Amanda Quick offers a final twist with who the main bad guy turns out to be."—Fresh Fiction

"Tightrope was a wonderful intense suspenseful story, filled with secrets, betrayals, pulse pounding action, and a sweet romance. Amanda Quick once again gives us a complex mystery that had a bit of everything and the fun of being in the glamorous world of 1930’s."—The Reading Cafe