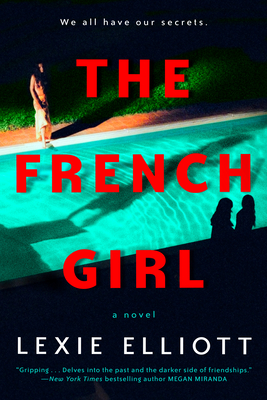 I Know What You Did Last Summer meets the French countryside in this exhilarating psychological suspense novel about a woman trapped by the bonds of friendship—perfect for fans of The Widow and The Woman in Cabin 10.

One of RealSimple's and Cosmopolitan's Best Books of the Month

Everyone has a secret...

They were six university students from Oxford—friends and sometimes more than friends—spending an idyllic week together in a French farmhouse. It was supposed to be the perfect summer getaway...until they met Severine, the girl next door.

But after a huge altercation on the last night of the holiday, Kate Channing knew nothing would ever be the same. There are some things you can't forgive. And there are some people you can't forget...like Severine, who was never seen again.

A decade later, the case is reopened when Severine's body is found behind the farmhouse. Questioned along with her friends, Kate stands to lose everything she's worked so hard to achieve as suspicion mounts all around her. Desperate to resolve her unreliable memories and fearful she will be forever bound to the memory of the woman who still haunts her, Kate finds herself entangled within layers of deception with no one to set her free....

Lexie Elliott grew up in Scotland, at the foot of the Highlands. She graduated from Oxford University, where she obtained a doctorate in theoretical physics. A keen sportswoman, she works in fund management in London, where she lives with her husband and two sons. The rest of her time is spent writing, or thinking about writing, and juggling family life and sport.

Praise for The French Girl

“You shouldn’t have any trouble picking up Lexie Elliott’s debut novel, The French Girl. It comes with a warning, though, because you will definitely have trouble putting it down.”—Richmond Times-Dispatch

“The French Girl commands attention. The author provides the perfect dose of character development before unveiling eerie details from her cast's past, ensuring that we're properly unnerved when their lives begin to unravel.”—Associated Press

“The shifting dynamics within the group will keep the reader guessing until the end. First novelist Elliott has done a phenomenal job of combining a whodunit with a Big Chill vibe.”—Library Journal (starred review)

“A gripping mystery that delves into the past and the darker side of friendships, this book will have you questioning everything you think you know. The French Girl is a fantastic debut about tangled relationships, shifting perceptions, and the memories—and people—that haunt us. I was completely captivated from beginning to end.”—Megan Miranda, New York Times bestselling author of The Perfect Stranger

“Scottish debut novelist Elliott, who holds a doctorate in theoretical physics from Oxford, launches a fiction-writing career with a smart, suspenseful thriller.”—Booklist

“A maelstrom of complicated friendships and shifting alliances. This addictive debut will keep you up late into the night!”—Karen Dionne, author of The Marsh King's Daughter