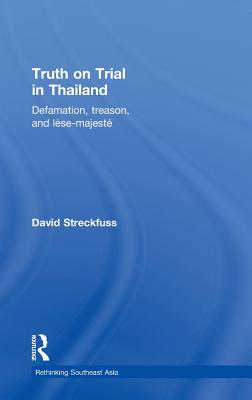 Since 2005, Thailand has been in crisis, with unprecedented political instability and the worst political violence seen in the country in decades. In the aftermath of a military coup in 2006, Thailand's press freedom ranking plunged, while arrests for l se-majest have skyrocketed to levels unknown in the modern world. Truth on Trial in Thailand traces the 110-year trajectory of defamation-based laws in Thailand. The most prominent of these is l se-majest , but defamation aspects also appear in laws on sedition and treason, the press and cinema, anti-communism, contempt of court, insulting of religion, as well as libel. This book makes the case that despite the appearance of growing democratization, authoritarian structures and urges still drive politics in Thailand; the long-term effects of defamation law adjudication has skewed the way that Thai society approaches and perceives "truth."

Employing the work of Habermas, Foucault, Agamben, and Schmitt to construct an alternative framework to understand Thai history, Streckfuss contends that Thai history has become "suspended" since 1958, and repeatedly declining to face the truth of history has set the stage for an endless state of crisis.

This book will be of interest to students and scholars of South East Asian politics, Asian history, and media and communication.

David Streckfuss is an independent scholar who has lived in Thailand for more than 20 years. His work primarily concerns human rights, and political and cultural history.

David Streckfuss is an independent scholar who has lived in Thailand for more than 20 years. His work primarily concerns human rights, and political and cultural history.