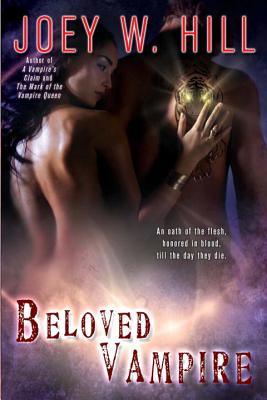 This is book number 4 in the A Vampire Queen Novel series.

Escaping the depraved servitude of a vampire master she killed, Jessica has found her way, with three nomadic guides, to the sun-baked desolation of the Sahara-only to slowly perish. Then she hears the tale of Farida, an enigmatic beauty lost as well to the Sahara three centuries ago, whose ancient desire for the legendary vampire Lord Mason is stirring the same desires in Jessica. But the more Jessica's fatal curiosity reveals of Farida, the closer she gets to Lord Mason's irresistible and forbidden secret.

"Excuse me while I gush like a fangirl. I was so afraid that Beloved Vampire, while starting out with a bang, would eventually fade into mediocrity like so many books. Not at all. As the book progressed, it just got better and better, until it is now officially one of my favorite (if not the favorite) vampire romances....Mason and Jessica are the most well-written, psychologically coherent characters I've read in a long time...This is essentially the erotica of my dreams....While there are explicit scenes, to simply call this book erotica would be severely shortchanging the story. This book is predominantly a story of two hurting souls finding each other and slowly learning to trust the world again...Read Beloved Vampire, even if you think you're sick to death of vampires. You won't regret it. The story is so sensual, so romantic. I'm envious of the fact that I'll never get that first-time excitement again. Desert Isle Keeper. Grade: A"
--All About Romance