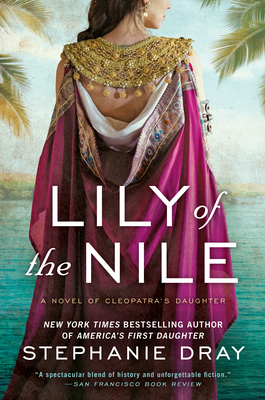 By Stephanie Dray
$16.00
Backordered or Out of Print

The extraordinary daughter of Cleopatra and Mark Antony seeks to reclaim her birthright in the first novel of an epic historical fiction trilogy from the New York Times bestselling author of America's First Daughter.

From the first breath of her life, young Princess Selene understands herself to be a cherished daughter and the future queen of Egypt. But when Alexandria falls and her parents are forced into suicide, the once-pampered princess and her two surviving brothers are left at the mercy of their captors and dragged through the streets of Rome in chains. Trapped in an empire that reviles her heritage and is suspect of her faith, Selene struggles for survival in a court of intrigue. She can’t hide the hieroglyphics that carve themselves into her hands, nor can she stop the Roman emperor from using her powers for his own ends.

Faced with a new and ruthless Caesar who is obsessed with having a Cleopatra of his very own, Selene is determined to resurrect her mother’s dreams and succeed where she failed. But there’s no telling what success will cost her in a treacherous political game where the only rule is win or die....

Stephanie Dray is a New York Times, Wall Street Journal, and USA Today bestselling author of historical women’s fiction. Her award-winning novels include America's First Daughter and My Dear Hamilton, co-authored with Laura Kamoie, and the Cleopatra’s Daughter Trilogy. Her work has been translated into eight languages and often tops lists for the most-anticipated reads of the year. Before she became a novelist, she was a lawyer and a teacher. Now she lives near the nation's capital with her husband, cats, and history books.

Praise for Lily of the Nile

“Lily of the Nile is graceful history infused with subtle magic and veiled ancient mysteries, at a time of immense flux and transition...Meticulously researched, thoroughly believable, this is a different kind of book, and a true achievement.”—Vera Nazarian, two-time Nebula Award–nominated author of Lords of Rainbow

“With clear prose, careful research, vivid detail, and a dash of magic, Stephanie Dray brings true life to one of Egypt’s most intriguing women in Lily of the Nile.”—Susan Fraser King, bestselling and award-winning author of Queen Hereafter and Lady Macbeth

“Cleopatra Selene has unusual gifts and problems, but her struggle to understand herself and her destiny is universal. The glimpses of the cult of Isis leave one wanting to know more, and the story keeps you turning the pages until the end.”—Diana L. Paxson, author of Marion Zimmer Bradley’s Sword of Avalon

More Praise for the Novels of Cleopatra’s Daughter

“A magnificent novel with a magical twist!”—Fresh Fiction

“Delicious prose, an exotic setting, and a heroine that will impress you with her unfailing courage and determination to reclaim what was once hers...historical women’s fiction at its finest.”—History and Women

“A stirring story of a proud, beautiful, intelligent woman whom a 21st century reader can empathize with.”—RT Book Reviews

“Strong, elegant prose and a strong, elegant heroine...Song of the Nile is a delight!”—New York Times bestselling author Kate Quinn