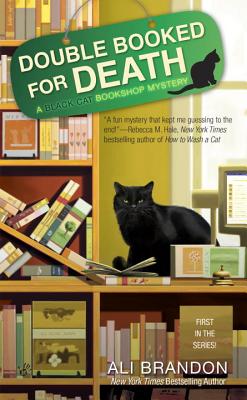 By Ali Brandon
$7.99
Backordered or Out of Print

This is book number 1 in the A Black Cat Bookshop Mystery series.

Darla Pettistone left Texas for New York after unexpectedly inheriting her Great-Aunt Dee’s Brooklyn bookstore. She didn’t know that the store’s mascot—Hamlet, an oversize black cat with a personality to match—was also part of the deal. And he may be more trouble than Darla bargained for…

As the new owner of Pettistone’s Fine Books, Darla Pettistone is determined to prove herself a worthy successor to her late great-aunt Dee…and equally determined to outwit Hamlet, the smarter-than-thou cat she inherited along with the shop.

Darla’s first store event is a real coup—the hottest bestselling author of the moment is holding a signing there, which brings hordes of fans and some protestors. But when the author meets an untimely end during the event, it’s hardly good for business, even though it’s  ruled an accident…until Hamlet digs up a clue that seems to indicate otherwise. Now Darla fears a killer might be lurking about… Can the interfering Hamlet point the paw at the culprit without losing one of his own nine lives?

Ali Brandon is the New York Times bestselling author of the Black Cat Bookshop Mystery series from Berkley Prime Crime, including Literally Murder and Words with Fiends. Writing under her real name, Diane A.S. Stuckart, she penned the popular Leonardo da Vinci historical mystery series, which received starred reviews from Publishers Weekly and Library Journal, as well as a Florida Book Award. A native Texan with a degree in Journalism from the University of Oklahoma, Diane a/k/a Ali now lives in South Florida. She’s a member of Mystery Writers of America and the Cat Writers Association, as well as caretaker to three spoiled felines.

“A fun mystery that kept me guessing to the end!”—Rebecca M. Hale, New York Times bestselling author of the Cats and Curios Mysteries


“An engaging new series…most definitely the start of something great.”—Sandra Balzo, award-winning author of the Maggy Thorsen and Main Street Mysteries