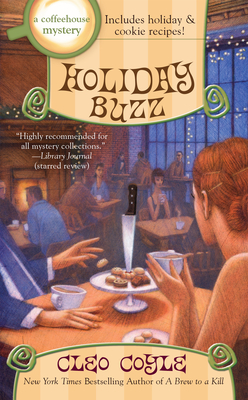 By Cleo Coyle
$7.99
Backordered or Out of Print

This is book number 12 in the A Coffeehouse Mystery series.

Holiday time is party time in New York City, but after a sparkling winter bash ends with a murder, Village Blend coffeehouse manager Clare Cosi vows to put the killer on ice.

At the Great New York Cookie Swap, pastry chefs bake up their very best for charity. Clare is in charge of the beverage service, and her famous Fa-la-la-la Lattes make the gathering even merrier. But her high spirits come crashing down to earth, when she discovers the battered body of a hard-working baker’s assistant.

Police suspect a serial attacker whose escalating crimes have become known as “The Christmas Stalkings.” Clare’s boyfriend, NYPD detective Mike Quinn, finds reason to believe even more sinister forces are involved. Clare isn’t so sure—and when she finds a second bludgeoned baker, she becomes a target. Now Clare is spending the holiday season pouring over clues, and she’s not going to rest until justice is served.

CLEO COYLE is a pseudonym for Alice Alfonsi, writing in collaboration with her husband, Marc Cerasini. Both are New York Times bestselling authors of The Coffeehouse Mysteries, now celebrating over ten years in print. Alice and Marc are also bestselling media tie-in writers who have penned properties for Lucasfilm, NBC, Fox, Disney, Imagine, and MGM. They live and work in New York City, where they write independently and together, including the nationally bestselling Haunted Bookshop Mysteries.

Praise for HOLIDAY BUZZ:
"Coyle’s coffeehouse series (A Brew to a Kill, 2012, etc.) captures the New York experience, from high-society parties to gritty back-street deals. The fine mystery is followed by some holiday recipes that will even pack the pounds on readers who are only browsing them." --Kirkus Reviews
Praise for Cleo Coyle's Coffeehouse mysteries:

“Coyle’s Coffeehouse books are superb examples of the cozy genre because of their intelligent cast of characters, their subtle wit, and their knowledge of the coffee industry.”—Library Journal (starred review)
“[A] frothy cast of lovable eccentrics."—Publishers Weekly
“Like a great cup of coffee, I can’t get enough of Cleo Coyle’s coffeehouse mysteries.”-Cozy Corner
"Clare and company are some of the most vibrant characters I've ever read."—Mystery Scene Magazine
"What a pleasure to read a book by this author."—Portland Book Review