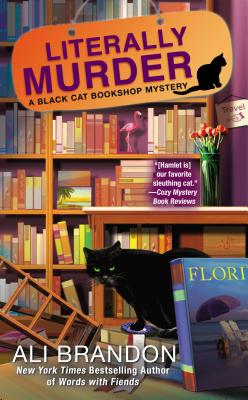 By Ali Brandon
$7.99
Backordered or Out of Print

This is book number 4 in the A Black Cat Bookshop Mystery series.

From her Brooklyn bookstore, Darla Pettistone not only sells mysteries, but solves them, aided by her big-boned black cat, Hamlet—who has suddenly pounced into the spotlight after unleashing his fists of furry…

After a video of Darla and Hamlet performing at a martial arts tournament goes viral, the Florida chapter of the Feline Society of America invites the “Karate Kitty” to be the guest of honor at their championship cat show in Fort Lauderdale.

Upon arrival, Darla discovers that not everyone in the Sunshine State has a sunny disposition. Animal rights activists are on the march, and a cat show contestant stages his own angry protest when his special breed Minx—half Sphynx, half Manx—doesn’t win. Then Hamlet disappears—only to be found next a dead man's body. Now it’s up to Darla and Hamlet to take best in show and collar the killer…

Ali Brandon is the pen name for Diane A. S. Stuckart, author of the Leonardo da Vinci Mysteries, as well as several acclaimed historical romances and numerous works of short fiction under the names Alexa Smart and Anna Gerard. The New York Times bestselling Black Cat Bookshop Mysteries include Double Booked for Death, A Novel Way to Die, and Words with Fiends.

“Fun…kept me guessing to the end!”—Rebecca M. Hale, New York Times bestselling author of How to Paint a Cat

“A charming, cozy read, especially if cats are your cup of tea.”—Elaine Viets, national bestselling author of Catnapped!