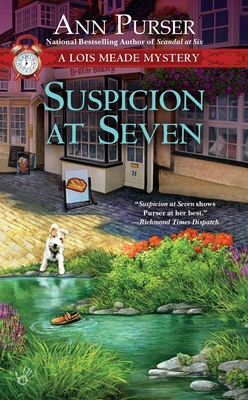 By Ann Purser
$7.99
Backordered or Out of Print

This is book number 7 in the Lois Meade Mystery series.

In the latest from the national bestselling author of Scandal at Six, Lois Meade is back to prove that when it comes to crime,  appearances may be deceiving…

After a woman is discovered in the Mill House Hotel, strangled with a silver necklace beside a bag filled with faux gems, jeweler Donald Black seems like the obvious suspect. But Lois knows Donald’s wife and can’t believe her husband is a killer. Plus, Donald has an airtight alibi.

Nevertheless, Donald is no angel. He’s running a pyramid scheme, and Lois’s mother is getting sucked in. Could the murder have anything to do with his unscrupulous business?

As Inspector Cowgill and Lois hope the bling may shine a light on the killer, the discovery of a second body in the hotel may prove the key to solving the murder—if they can catch the culprit before someone else checks out.

Ann Purser is the author of the Lois Meade mysteries (Scandal at Six, Found Guilty at Five) and the Ivy Beasley mysteries (The Blackwoods Farm Enquiry, The Sleeping Salesman Enquiry). She was born in Market Harborough in Leicestershire and has lived most of her life in villages. She has turned her hand to many things, including journalism (as a columnist for SHE magazine), keeper of hens and donkeys, art gallery manager, clerical assistant in a village school, Open University graduate, novelist, mother of three, and wife of Philip Purser, critic and writer. She is an avid reader of detective stories.

“Suspicion at Seven shows Purser at her best.”—Richmond Times-Dispatch

Praise for the Lois Meade mysteries

“A working-class Miss Marple…The entire series [is] a treat.”—Richmond Times-Dispatch

“[A] delightful mystery with its quaint setting and fascinating players.”—Library Journal

“A fine series that just keeps getting better—a must for British cozy fans.”—Booklist