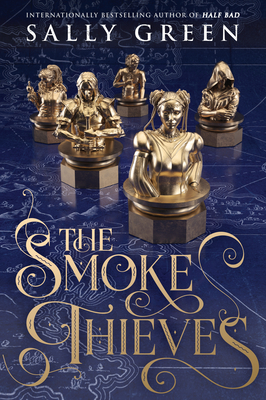 By Sally Green
$10.99
Backordered or Out of Print

This is book number 1 in the The Smoke Thieves series.


In a land tinged with magic and a bustling trade in an illicit supernatural substance, destiny will intertwine the fates of five players:

A visionary princess determined to forge her own path.

An idealistic solider whose heart is at odds with his duty.

A streetwise hunter tracking the most dangerous prey.

A charming thief with a powerful hidden identity.

A loyal servant on a quest to avenge his kingdom.

Their lives intersect with a stolen bottle of demon smoke. As war approaches, they must navigate a tangled web of political intrigue, shifting alliances, and forbidden love in order to uncover the dangerous truth about the strangely powerful smoke that interwines their fates.

Sally Green lives in Cheshire, England. She has had various jobs from her first paper-round to a career as an accountant, but in 2010 she started writing a novel and that changed her life. She still runs most days despite several attempts to give it up. Follow her on Twitter @Sa11eGreen.

"A YA Game of Thrones that pits power against love, conviction against convention."—Booklist

"The pieces that come together at the end are clearly only a part of a massive puzzle, teasing readers and ensuring a sequel." —BCCB Reviews

“Will hold readers rapt until the harrowing conclusion.” —Publishers Weekly

"Love, humor, politics, machinations, loyalty, violence, and magic swirl and shine in this fast-paced book that lovers of this genre will fall into and not want to climb out of." —School Library Connection

A Kids' Indie Next Selection