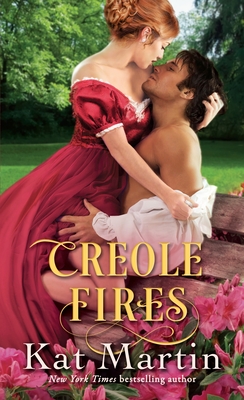 By Kat Martin
$8.99
Backordered or Out of Print

The Louisiana sun beat mercilessly on Nicole St. Claire just as fate, too, had been merciless. The once wealthy, flirtatious belle stood on the auction block to be sold as a servant. Her sensual figure disguised, her glorious titian hair disheveled, she looked like a waif, but she was all woman, trembling when she recognized the highest bidder—idol of her childhood dreams, the owner of plantation Belle Chene.

A man of blazing passion, Alex du Villier bought the girl out of pity, but her aqua eyes stirred his soul and her body ignited his blood. She would be the perfect mistress to make him forget his coming marriage to a cold, haughty heiress. Now he intended to teach this innocent beauty that although he had purchased her freedom, he could steal her heart.

An affair of burning desires. . . . Under a Creole moon their passion became a wildfire neither could control, driving them to heart-wrenching choices of silken sin . . . or freedom and love.

Kat Martin is the New York Times bestselling author of more than sixty books across multiple genres, with sixteen million copies in print. She has been published in twenty-one foreign countries, including Japan, France, Argentina, Greece, China, and Spain. Her books have been nominated for the prestigious RITA award, and won both the Lifetime Achievement and Reviewer’s Choice Awards from RT Book Reviews. A resident of Missoula, Montana, Martin is a graduate of the University of California at Santa Barbara, where she majored in anthropology and also studied history. She and her author husband, L.J. Martin, spend their winters in Ventura, California.