Kiss of the Highlander (Mass Market) 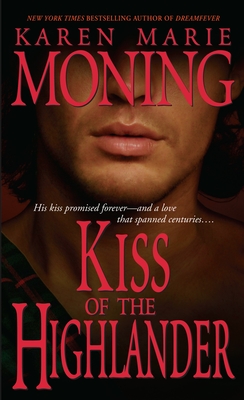 By Karen Marie Moning
Email or call for price.
Backordered

This is book number 4 in the Highlander series.

A laird trapped between centuries...

Enchanted by a powerful spell, Highland laird Drustan MacKeltar slumbered for nearly five centuries hidden deep in a cave, until an unlikely savior awakened him. The enticing lass who dressed and spoke like no woman he’d ever known was from his distant future, where crumbled ruins were all that remained of his vanished world. Drustan knew he had to return to his own century if he was to save his people from a terrible fate. And he needed the bewitching woman by his side....

A woman changed forever in his arms...

Gwen Cassidy had come to Scotland to shake up her humdrum life and, just maybe, meet a man. How could she have known that a tumble down a Highland ravine would send her plunging into an underground cavern — to land atop the most devastatingly seductive man she’d ever seen? Or that once he’d kissed her, he wouldn’t let her go?

Bound to Drustan by a passion stronger than time, Gwen is swept back to sixteenth-century Scotland, where a treacherous enemy plots against them ... and where a warrior with the power to change history will defy time itself for the woman he loves....

Karen Marie Moning is the #1 New York Times bestselling author of the Fever series, featuring MacKayla Lane, and the award-winning Highlander series. She has a bachelor’s degree in society and law from Purdue University.