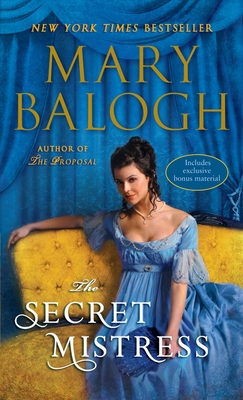 By Mary Balogh
Email or call for price.
Special Order

This is book number 3 in the The Mistress Trilogy series.

While Lady Angeline Dudley’s pedigree dictates that she must land a titled gentleman, the irrepressible beauty longs for a simple, ordinary suitor. So when Edward Ailsbury, the new Earl of Heyward, defends her honor with unmatched civility, Angeline thinks that she has found true love. Persuading the earl is another matter entirely. From her unconventional fashion sense to her hoydenish antics, Angeline is the last woman on earth for Edward. And yet a stolen kiss awakens something primal within him. Naturally, being a gentleman, he does the right thing after compromising a lady: He offers marriage. The proposal is born of duty, but will Angeline cause Edward to forget about decorum behind closed doors, where sensuality and seduction play wicked games? For a proper wife by day can become a husband’s secret mistress by night, when delicious desire rules.

Mary Balogh is the New York Times bestselling author of numerous books, including the acclaimed Slightly and Simply novels, the Mistress novels, and the five titles in her Huxtable series: First Comes Marriage, Then Comes Seduction, At Last Comes Love, Seducing an Angel, and A Secret Affair. A former teacher, she grew up in Wales and now lives in Canada.