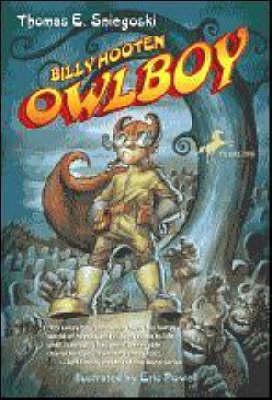 By Tom Sniegoski
$5.99
Backordered or Out of Print

Billy Hooten is a weird kid. He gets beat up a lot, and spends the rest of his time doggedly trying to build a robot. One day, Billy Hooten hears a cry for help coming from the cemetery that borders his backyard. Against his better judgment, he runs toward it. And after that, everything changes for Billy Hooten. Because Billy Hooten, you see, is Owlboy. A quickthinking, goggle-and-feather-wearing superhero who protects the bizarre and monstrous citizens of Monstros City, a city that exists under Billy's hometown of Bradbury, Massachusetts. But is Billy truly worthy of the moniker Owlboy?

Tom E. Sniegoski has worked in the comic book field for several years. He is the author of the Fallen series, recently made into a TV movie for the ABC Family channel. He lives in Stoughton, Massachusetts.

Eric Powell found true success when he launched his critically acclaimed dark comedy series "The Goon." It is now hailed as one of the most original comics in the industry and boasts a diehard cult following. He lives in Tennesee.

"It's every boy's dream to have his fantasy world of heroes and villians come to life—until it actually happens! Believable characters youÕll want to cheer for."—Jeff Smith, creator of the Bone series