Owlboy: The Girl with the Destructo Touch (Paperback) 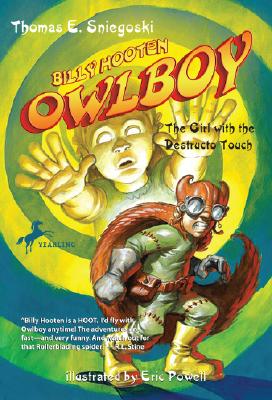 By Tom Sniegoski
$5.99
Backordered or Out of Print

One day, using the magical passage that will take him to Monstros City, Billy forgets to close the door to the crypt, and is followed by . . . Victoria. Oh, no. Victoria is Billy's neighbor, his constant shadow, and a huge pain in the butt. Worse, Monstros City seems to exaggerate the traits people have in Bradbury—and Victoria arrives in Monstros with something that Billy and Archebold name the Destructo Touch. Owlboy is supposed to protect Monstros City—but has he just introduced the agent of its destruction?

Tom E. Sniegoski has worked in the comic book field for several years. He is the author of the Fallen series, recently made into a TV movie for the ABC Family channel. He lives in Stoughton, Massachusetts.

Eric Powell found true success when he launched his critically acclaimed dark comedy series "The Goon." It is now hailed as one of the most original comics in the industry and boasts a diehard cult following. He lives in Tennesee.