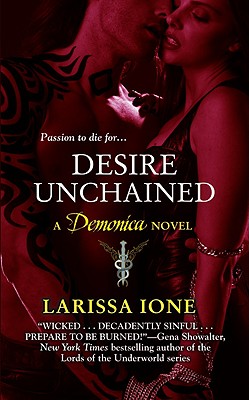 By Larissa Ione
Email or call for price.
Special Order

This is book number 2 in the Demonica series.

Prepare to be burned (Gena Showalter) by this sexy and suspenseful enemies-to-lovers paranormal romance in the New York Times bestselling Demonica series.

Runa Wagner never meant to fall in love with the sexy stranger who seemed to know her every deepest desire. But she couldn't resist the unbelievable passion that burned between them, a passion that died when she discovered his betrayal and found herself forever changed. Now, determined to make Shade pay for the transformation that haunts her, Runa searches for him, only to be taken prisoner by his darkest enemy.

A Seminus Demon with a love-curse that threatens him with eternal torment, Shade hoped he'd seen the last of Runa and her irresistible charm. But when he wakes up in a dank dungeon chained next to an enraged and mysteriously powerful Runa, he realizes that her effect on him is more dangerous than ever.

As their captor casts a spell that bonds them as lifemates, Shade and Runa must fight for their lives and their hearts-or succumb to a madman's evil plans.