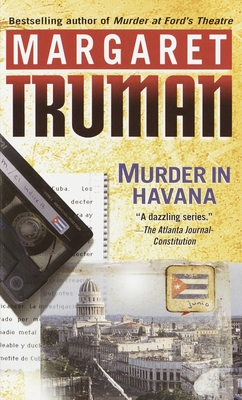 This is book number 18 in the Capital Crimes series.

Havana may be far from Washington, but DC power brokers are never far from Havana. Neither are danger, deception, and sudden death. That’s what draws Max Pauling there. As an ex-CIA, ex-State Department employee, he faces an uneventful early retirement–until he is asked to secretly fly some medical supplies into the mysterious Cuban city.

If Max is looking for excitement, he finds it. First there’s his contact, a breathtaking beauty with private plans of her own. Then there’s a former senator, in Havana to ease the U.S. embargo, but who may have another, more malevolent, mission. Throw in endless supplies of under-the-table money– not to mention a murder–and Max has landed in a place even more corrupt . . . and more compelling . . . than the U.S. capital itself.

Margaret Truman has won faithful readers with her works of biography and fiction, particularly her ongoing series of Capital Crimes mysteries (nineteen and counting)–from Murder in the White House to Murder at Ford’s Theatre. Her novels let us into the corridors of power and privilege, poverty and pageantry, in the nation’s capital. She lives in Manhattan.

“Truman can write suspense with the best of them.”
–LARRY KING