Mr. Monk is Cleaned Out (Hardcover) 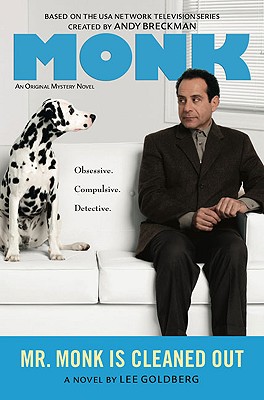 By Lee Goldberg
Email or call for price.
Special Order

Monk's been swindled out of his savings-but now it's payback time, in the latest original mystery featuring everyone's favorite OCD detective.
In the midst of a financial crisis, the SFPD fires Adrian Monk as a consultant. Monk figures he can live off his savings for a while. Then Natalie learns that Monk invested his money some time ago with Bob Sebes, the charismatic leader of Reinier Investments, who's just been arrested on charges of orchestrating a massive $100 million fraud. All of Sebes' clients-including Monk-are completely wiped out.
When the key witness in the government's case against Sebes is killed, Monk is convinced that Sebes did it, but the man has been under house arrest with a horde of paparazzi in front of his building 24/7. Monk may be broke, but he's got plenty of time on his hands to solve this latest mystery...

Lee Goldberg has written episodes for the Monk television series, as well as many other programs. He is a two-time Edgar Award nominee and the author of the acclaimed Diagnosis Murder novels, based on the TV series for which he was a writer and executive producer.