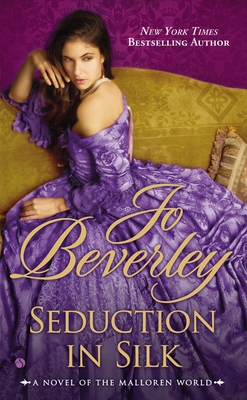 This is book number 13 in the A Mallorean Novel series.

From five-time RITA Award winner Jo Beverley comes a scintillating historical romance set in the Georgian age—where a centuries old feud and a wicked curse lead to a most unconventional marriage...

When confirmed bachelor Peregrine Perriam is named heir to Perriam Manor, he discovers that he only has a month to persuade a stranger to the altar. Otherwise the property will be lost and his line will be cursed—forever.

Having survived her parents’ tormented marriage, Claris Mallow prefers poverty to any husband. When a high-born stranger demands her hand, she drives him off at pistol point. Then Perry finds weapons of his own, and the reluctant lady is compelled to accept his proposal.

Claris sets the condition that their marriage be in name only. But once she becomes mistress of Perriam Manor, she discovers that she isn’t immune to Perry’s charms. Perhaps a real marriage might be worth the risk—including a real marriage bed...

Praise for the Novels of Jo Beverley