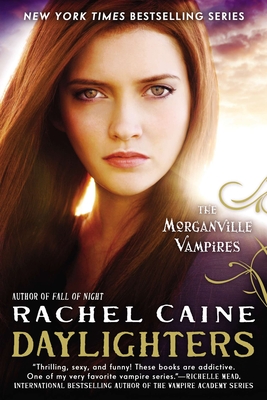 This is book number 15 in the The Morganville Vampires series.

While Morganville, Texas, is often a troubled town, Claire Danvers and her friends are looking forward to coming home. But the Morganville they return to isn’t the one they know; it’s become a different place—a deadly one…

Something drastic has happened in Morganville while Claire and her friends were away. The town looks cleaner and happier than they’ve ever seen it before, but when their incoming group is arrested and separated—vampires from humans—they realize that the changes definitely aren’t for the better.

It seems that an organization called the Daylight Foundation has offered the population of Morganville something they’ve never had: hope of a vampire-free future. And while it sounds like salvation—even for the vampires themselves—the truth is far more sinister and deadly.

Now, Claire, Shane and Eve need to find a way to break their friends out of Daylighter custody, before the vampires of Morganville meet their untimely end…

Includes a teaser from Prince of Shadows: A Novel of Romeo and Juliet!

Rachel Caine is the New York Times and USA Today bestselling author of more than thirty novels, including the Weather Warden series, the Outcast Season series, the Revivalist series, and the New York Times bestselling Morganville Vampires series, including Bitter Blood, Black Dawn, Last Breath, and Bite Club.  She is also the author of Prince of Shadows, a new spin on the classic tale of Romeo and Juliet.

She was born at White Sands Missile Range, which people who know her say explains a lot. She has been an accountant, a professional musician, and an insurance investigator, and, until recently, carried on a secret identity in the corporate world as a communications executive. She and her husband, fantasy artist R. Cat Conrad, live in Texas.

Praise for the Morganville Vampire series

“Thrilling, sexy, and funny! These books are addictive. One of my very favorite vampire series.”—Richelle Mead, international bestselling author of the Vampire Academy series

“Morganville, Texas, is my favorite town that I never want to visit…[A] spectacular series.”—Fiction Vixen

“The element of surprise is rare in paranormal YA books these days and yet that’s what this series consistently delivers.”—All Things Urban Fantasy

“A rousing horror thriller that adds a new dimension to the vampire mythos… An electrifying enthralling coming of age supernatural tale.”—Midwest Book Review