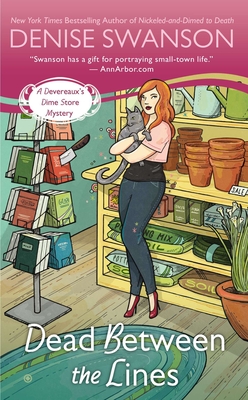 By Denise Swanson
Email or call for price.
Special Order

Opening an old-fashioned five-and-dime shop in her small Missouri hometown has been a great change for Devereaux “Dev” Sinclair. But when she hosts a reading group there, she learns that bad writing can mean life or death.

To keep her new business in the black, Dev opens up her shop to local clubs. But in the first meeting of the Stepping Out Book Club, the speaker storms out after members attack his poetry’s sexism and scorn for small towns. Later that night, the poet’s body is found outside Dev’s store.

Dev can’t afford for the murder to close her down, so she does a little stepping out of her own to investigate, with help from her two sexy suitors, Dr. Noah Underwood and Deputy U.S. Marshal Jake Del Vecchio. But when the killer threatens Dev, they will have to use every trick in the book to solve the case before she becomes the final chapter in this murder mystery.…

Includes a sneak peek at the next Scumble River Mystery!

Denise Swanson is the author of the Devereaux’s Dime Store Mystery series, and the New York Times bestselling Scumble River Mystery series.  She lives in Illinois with her husband, classical music composer David Stybr, and their cool black cat, Boomerang.

“Swanson has a gift for portraying small-town life.”—AnnArbor.com

“Delightful.…Readers will look forward to seeing more of the quick-witted Dev.”—Publishers Weekly