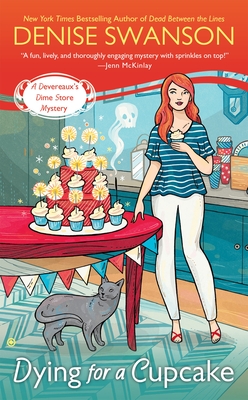 By Denise Swanson
Email or call for price.
Special Order

When Devereaux “Dev” Sinclair hosts a cupcake contest at her five-and-dime store, she discovers that someone is just dying to win...

Kizzy Cutler finds it so delicious to be back in her hometown of Shadow Bend, Missouri, that she seems to have forgotten why she fled twenty years ago. For now, she’s excited to kick off her new line of cupcakes with a competition, which Dev has agreed to host in her shop. But before the first yummy cupcake is even baked, Kizzy's assistant Fallon dies from a mysterious ailment.

While the medical examiner attempts to discover what killed Fallon, Kizzy declares that the show must go on. However after Kizzy escapes several near misses, Dev is convinced that someone in Shadow Bend has it in for the Cupcake Queen. Is the secret from her past so dark someone still wants to kill her for it?

With a list of not-so-sweet suspects, Dev’s in a race against the timer to solve the murder before someone else gets iced…

Includes a sneak peak of the next Scumble River Mystery!

Denise Swanson is the New York Times bestselling author of the Scumble River Mystery series and Devereaux’s Dime Store Mystery series. She worked as a school psychologist for twenty-two years before quitting to write full-time. She lives in Illinois with her husband, classical composer David Stybr, and their cool black cat, Boomerang.