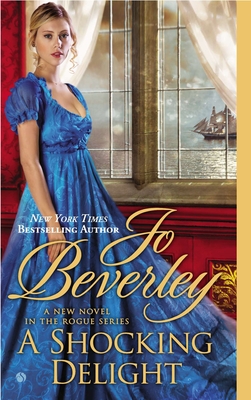 This is book number 15 in the Rogue Series series.

From New York Times bestselling author Jo Beverley comes a captivating Regency romance in which a lady must risk it all to win the heart of an infamous Earl...

Lucinda Potter, daughter of a wealthy merchant, is more interested in trade than in the men after her dowry. When forced to have a London season, Lucy sets out to enjoy herself rather than to find a husband. But once she meets the notorious Earl of Wyvern, her resolve weakens, and when they kiss, it dissolves—even though her instincts warn he’s dangerous.

Wyvern has a dark secret, which means he must win a rich bride. Lucy seems ideal—not for her beauty and her lively charm, but because at first meeting she seems unlikely to realize the truth...

As he comes to really know her with each intoxicating kiss, Wyvern realizes she’s too clever and honest by far. Marrying Lucy would mean living a lie with the woman he has come to love.

Praise for A Shocking Delight

“RITA Award-winning Beverley returns to her impeccably crafted Regency-set Company of Rogues world with another thrilling romance. Scenes set in both London and Devonshire are handled with perfect aplomb, and the chemistry Beverley brews up between David (first introduced as a smuggling master in The Dragon´s Bride, 2001) and Lucy is pure passion.”—Booklist

“A notorious nobleman who needs to marry for money, a merchant's daughter who's more clever than he thinks, and a handful of characters reprised from Beverley's beloved 'Rogues' novels meet in a fast-paced, rugged, swashbuckling exploit with strong ties to The Dragon's Bride; with all of Beverley's trademark sensuality, humor, and flair.”—Library Journal

More Praise for the Novels of Jo Beverley