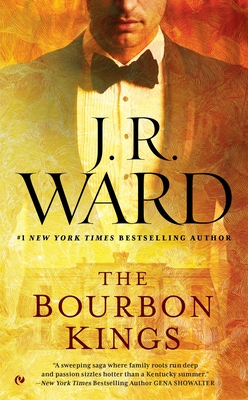 This is book number 1 in the The Bourbon Kings series.

The #1 New York Times bestselling author of the Black Dagger Brotherhood delivers the first novel in an enthralling new series set amid the shifting dynamics of a Southern family defined by wealth and privilege—and compromised by secrets, deceit, and scandal. . . .

Upstairs on the sprawling estate of Easterly, the kings of the bourbon capital of the world—the Bradford family—appear to play by the rules of good fortune and taste. Downstairs, the staff works tirelessly to maintain the impeccable Bradford facade. And never the twain shall meet.

For Lizzie King, Easterly’s head gardener, crossing that divide nearly ruined her life. Falling in love with Tulane, the prodigal son of the bourbon dynasty, was nothing she intended—and their breakup proved her instincts right. Now, after two years, Tulane is coming home. And no one will be left unmarked. . . .

J. R. Ward is the author of more than twenty previous novels, including those in her #1 New York Times bestselling series, the Black Dagger Brotherhood. There are more than fifteen million copies of Ward’s novels in print worldwide, and they have been published in twenty-five different countries around the world. She lives in the South with her family.

“Get ready for summer’s most sinful indulgence. The drama never stops in this tale of family secrets, lost love found, rivalries, delightfully nasty villains, and deliciously appealing heroes. The clothes, the whiskey, and the gorgeous Kentucky backdrop will sweep you away. The privileged and the downtrodden never had it so good. Put on your derby hat and join in the fun.”—New York Times bestselling author Susan Wiggs

“Breathless fun! J. R. Ward moves her trademark dark and sexy from the world of warrior vampires to the halls of the Kentucky elite, where the family members’ claws are just as sharp and the consequences just as deadly. I couldn’t stop turning the pages!”—New York Times bestselling author Lisa Gardner

“With more devious characters than Dynasty, The Bourbon Kings is juicy soap opera at its finest.”—The Philadelphia Enquirer

“Soapy elements abound in this Dynastyesque tale, from lavish wealth to feuds, dirty secrets, and forbidden love…Ward is a master of pacing and world building, and readers will love that the cliff-hanger ending guarantees at least a second helping of the Bradfords.”—Booklist (starred review)