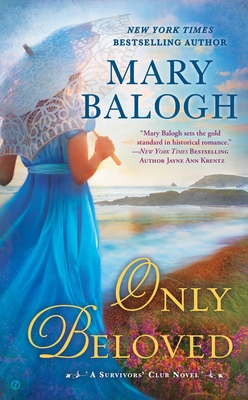 From the legendary New York Times bestselling author of Only a Kiss and Only a Promise comes the final book in the rapturous Survivor’s Club series—as the future of one man lies within the heart of a lost but never-forgotten love...

For the first time since the death of his wife, the Duke of Stanbrook is considering remarrying and finally embracing happiness for himself. With that thought comes the treasured image of a woman he met briefly a year ago and never saw again.

Dora Debbins relinquished all hope to marry when a family scandal left her in charge of her younger sister. Earning a modest living as a music teacher, she’s left with only an unfulfilled dream. Then one afternoon, an unexpected visitor makes it come true.

For both George and Dora that brief first encounter was as fleeting as it was unforgettable. Now is the time for a second chance. And while even true love comes with a risk, who are two dreamers to argue with destiny?

Mary Balogh grew up in Wales and now lives with her husband, Robert, in Saskatchewan, Canada. She has written more than one hundred historical novels and novellas, more than thirty of which have been New York Times bestsellers. They include the Bedwyn saga, the Simply quartet, the Huxtable quintet, the seven-part Survivors’ Club series and the Westcott series.

Praise for Only Beloved

“[An] unforgettable, danger-tinged story. It tugs at the heartstrings and will leave fans thoroughly gratified.”—Library Journal (starred review)

“A satisfying conclusion to an intense and popular historical series.”—Publishers Weekly

“Balogh wraps up her celebrated series with a  perfect happy-ever-after.”—Kirkus Reviews

“A novel filled with realistic characters, a tender love story and a bit of suspense…that holds readers spellbound.”—RT Book Reviews

“Another heart-warming and impressive performance from Balogh”—Historical Novel Society