Someone To Love (The Westcott Series #1) (Mass Market) 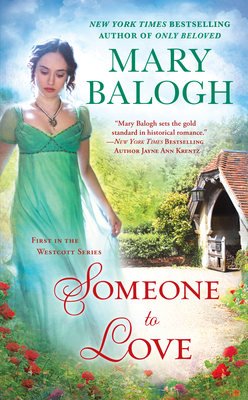 This is book number 1 in the The Westcott Series series.

New York Times bestselling author Mary Balogh presents the first historical romance in the Westcott series, where the death of an earl reveals a most scandalous secret.

Humphrey Westcott, Earl of Riverdale, has died, leaving behind a fortune that will forever alter the lives of everyone in his family—including the daughter no one knew he had...

Anna Snow grew up in an orphanage in Bath knowing nothing of the family she came from. Now she discovers that the late Earl of Riverdale was her father and that she has inherited his fortune. She is also overjoyed to learn she has siblings. However, they want nothing to do with her or her attempts to share her new wealth. But the new earl’s guardian is interested in Anna…

Avery Archer, Duke of Netherby, keeps others at a distance. Yet something prompts him to aid Anna in her transition from orphan to lady. As London society and her newfound relatives threaten to overwhelm Anna, Avery steps in to rescue her and finds himself vulnerable to feelings and desires he has hidden so well and for so long.

Mary Balogh has written more than one hundred historical novels and novellas, more than thirty of which have been New York Times bestsellers. They include the Bedwyn saga, the Simply quartet, the Huxtable quintet, the seven-part Survivors' Club series, and the Westcott series.

Praise for Someone to Love

“With the first in her new Westcott series, Balogh proves once again why she is the heir apparent to Georgette Heyer’s literary crown by gifting readers with another irresistible confection composed of exquisitely nuanced characters, an impeccably crafted setting, and an abundance of dry wit.”—Booklist (starred review)

“A superb author whose narrative voice comments on the characters and events of her novel in an ironic tone reminiscent of Jane Austen.”—Milwaukee Journal Sentinel