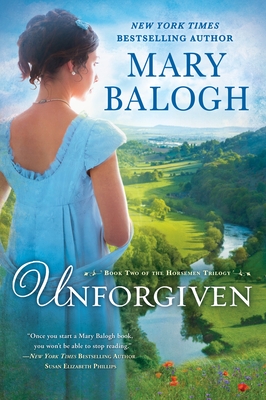 By Mary Balogh
$16.00
Backordered or Out of Print

This is book number 2 in the The Horsemen Trilogy series.

Moira Hayes hadn’t seen Kenneth Woodfall in nearly eight years. Nor did she want to see this man who stirred such feelings of anger in her. After all, their families had been rivals since their great-grandfathers’ day. And he was the reason—though indirectly—for her own brother’s death.

But Kenneth has returned from war and is home for good. And he isn’t willing to forget the past—a time he shared with his first and only love, Miss Moira Hayes. The moment he sees her again, he knows his future. Because Kenneth is more than willing to forgive.

If only Moira can too...

Mary Balogh grew up in Wales and now lives with her husband, Robert, in Saskatchewan, Canada. She has written more than one hundred historical novels and novellas, more than thirty of which have been New York Times bestsellers. They include the Bedwyn saga, the Simply quartet, the Huxtable quintet, the seven-part Survivors’ Club series, and the Westcott series.

“One of the best!”—New York Times bestselling author Julia Quinn

"When it comes to historical romance, Mary Balogh is one of my favorites!"—New York Times bestselling author Eloisa James