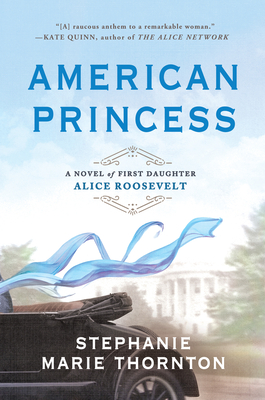 By Stephanie Marie Thornton
$16.00
Backordered or Out of Print

“As juicy and enlightening as a page in Meghan Markle's diary.”—InStyle

Alice may be the president's daughter, but she's nobody's darling. As bold as her signature color Alice Blue, the gum-chewing, cigarette-smoking, poker-playing First Daughter discovers that the only way for a woman to stand out in Washington is to make waves—oceans of them. With the canny sophistication of the savviest politician on the Hill, Alice uses her celebrity to her advantage, testing the limits of her power and the seductive thrill of political entanglements.

But Washington, DC is rife with heartaches and betrayals, and when Alice falls hard for a smooth-talking congressman it will take everything this rebel has to emerge triumphant and claim her place as an American icon. As Alice soldiers through the devastation of two world wars and brazens out a cutting feud with her famous Roosevelt cousins, it's no wonder everyone in the capital refers to her as the Other Washington Monument—and Alice intends to outlast them all.

Stephanie Marie Thornton is a USA Today bestselling author and a high school history teacher. She lives in Alaska with her husband and daughter.

“Epic in scope and rich in immersive detail, American Princess is a compelling and poignant tribute to one of America's most colorful, unconventional, and trend-setting women. Highly recommended read!”—Laura Kamoie, New York Times bestselling coauthor of America's First Daughter and My Dear Hamilton

“A fascinating account of the life of the daring and adventurous Alice Roosevelt Longworth. Brimming with political history, scandal, and insight into some of America's most influential figures, American Princess is a must-read for historical fiction fans.”—USA Today bestselling author Chanel Cleeton, author of Next Year in Havana, A Reese Witherspoon Bookclub Pick

“Thornton skillfully brings to life the incomparable and unapologetic Alice Roosevelt, whose scandalous life was at the center of American politics for nearly a century. Fast-paced and written with verve and sass, this book is a treat and a treasure for history lovers. Fabulous!”—Stephanie Dray, New York Times bestselling coauthor of America's First Daughter and My Dear Hamilton

“Skillfully woven and impeccably researched, American Princess brims with scandals, secrets, and the complexities of love in all of its wondrous, maddening forms. A vividly imagined portrait that mesmerized me from the first page to the last.”—Kristina McMorris, New York Times bestselling author of Sold on a Monday

“The wild, wonderful, outsize personality of presidential daughter Alice Roosevelt is on full and fantastic display in this lightly fictionalized take on her unapologetic, unconventional life....Alice herself would undoubtedly have loved this take on her unorthodox life—as will the many destined to read it.”—Publishers Weekly

“An absorbing portrait of a woman who lived life on her own terms.”—Booklist

“Readers will be enthralled by Alice’s wit and adventures...as Thornton expertly weaves the events of her life.”—Library Journal

“A rare behind-the-scenes tale of a spunky woman who relies on her independent spirit to face down each challenge with courage and grace.”—Woman's World

“Readers who enjoy sweeping family sagas will devour this novel with its feisty protagonist and host of well-known historical figures. It comes highly recommended.”—Historical Novel Reviews

“Witty and poignant, chock full of secrets and scandals and richly researched, American Princess has everything you could want in historical fiction.”—Renée Rosen, bestselling author of Windy City Blues

“Stephanie Thornton's sparkling new novel captivates from page one. This intimate portrait of Alice Roosevelt follows America's favorite first daughter from wild young debutante to Washington DC grand dame and delights every step of the way.”—Alix Rickloff, author of The Way to London

“I loved reading about how this no-holds-barred woman took the country, the world by storm.  Her life spans many of the important events and people of the twentieth century, from World War I to the assassination of J.F. Kennedy. A completely satisfying, mesmerizing, read.”—Jeanne Mackin, author of The Beautiful American

“With graceful prose, Thornton paints a lively portrait of the indomitable Alice Roosevelt—socialite, writer, and president’s daughter....A rich and compelling read, American Princess is one I won’t soon forget.”—Heather Webb, international bestselling author of Last Christmas in Paris: A Novel of WWI

“I fell in love with Alice Roosevelt's voice....Thornton has successfully created an endearing, unforgettable female figure....American Princess, is a powerful, mesmerizing historical novel, destined to be shelved as a classic!”—Weina Dai Randel, author of The Moon in the Palace, 2017 RWA RITA® Award Winner