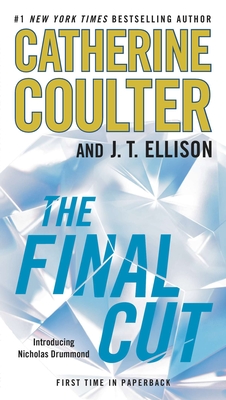 By Catherine Coulter, J. T. Ellison
$9.99
Backordered or Out of Print

Scotland Yard’s new chief inspector Nicholas Drummond is on the first flight to New York when he learns his colleague, Elaine York, the “minder” of the Crown Jewels for the “Jewel of the Lion” exhibit at the Metropolitan Museum of Art, was found murdered. Then the centerpiece of the exhibit, the infamous Koh-i-Noor Diamond, is stolen from the Queen Mother’s crown. Drummond, American-born but raised in the UK, is a dark, dangerous, fast-rising star in the Yard who never backs down. And this case is no exception.

Special Agents Lacey Sherlock and Dillon Savich from Coulter’s bestselling FBI series don’t hesitate to help Drummond find the cunning international thief known as the Fox. Nonstop action and high stakes intensify as the chase gets deadly. The Fox will stop at nothing to deliver the Koh-i-Noor to the man who believes in its deadly prophecy.  Nicholas Drummond, along with his partner, FBI Special Agent Mike Caine, lay it on the line to retrieve the diamond for Queen and country.

J. T. Ellison is the bestselling author of twelve critically acclaimed novels, including What Lies Behind and When Shadows Fall, and her work has been published in more than twenty countries. Her novel The Cold Room won the ITW Thriller Award for Best Paperback Original and Where All the Dead Lie was a RITA® Nominee for Best Romantic Suspense. She is also coauthor of the Brit in the FBI series, including the New York Times bestsellers The End Game, The Lost Key, and The Final Cut.

PRAISE FOR THE FINAL CUT

“Fast-paced and action-packed, with the promise of romance to come, this entertaining thriller merges fact and fiction to superb effect.”—Library Journal (starred review)

"The twists to the story are nonstop, and the characters sparkle like precious stones....One of the best thrillers of the year."—Associated Press

“Coulter and Ellison have created a new son of Bond licensed to shine in future thrillers. Genre fans will find the action nonstop.”—Kirkus


“The twists to the story are nonstop, and the characters sparkle like precious stones…One of the best thrillers of the year.”—The Associated Press

“Fast-paced and action-packed, with the promise of romance to come, this entertaining thriller merges fact and fiction to superb effect.”—Library Journal (starred review)

“Coulter and Ellison have created a new son of Bond licensed to shine in future thrillers. Genre fans will find the action nonstop.”—Kirkus Reviews

“A thriller that manages to be both intricate and full of jaw-dropping action sequences…Drummond connects in entertaining fashion with Coulter’s main series heroes, FBI agents Dillon Savich and Lacey Sherlock…Ingenious disguises, daring bluffs, and hair-breadth escapes add to the fun of the chase.”—Publishers Weekly

“Coulter and Ellison do an excellent job blending their writing styles in this pulse-pounding novel and have produced an outstanding chase thriller that is riveting from beginning to end. This could be the start of a great partnership!”—RT Book Reviews (4 ½ stars)

“I think Drummond and Caine will probably be an entertaining series…a fun tale.”—criminalelement.com