Everything Leads to You (Hardcover) 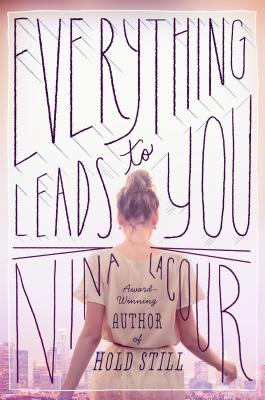 "I want you to do something with the place. Something epic."

After being entrusted with her brother's Los Angeles apartment for the summer as a graduation gift, Emi Price isn't sure how to fulfill his one condition: that something great take place there while he's gone. Emi may be a talented young production designer, already beginning to thrive in the competitive film industry, but she still feels like an average teen, floundering when it comes to romance.

But when she and her best friend, Charlotte, discover a mysterious letter at the estate sale of a Hollywood film legend, Emi must move beyond the walls of her carefully crafted world to chase down the loose ends of a movie icon’s hidden life, leading her to uncover a decades’ old secret and the potential for something truly epic: love.

Nina LaCour (www.ninalacour.com) is the author of the award-winning Hold Still and widely acclaimed The Disenchantments. Formerly a bookseller and high school English teacher, she now writes and parents full time. A San Francisco Bay Area native, Nina lives with her family in Oakland, California.

Praise for Everything Leads to You:

"LaCour has a knack for capturing the unique intensity of teenage characters discovering love, sex and intense friendship for the first time . . . [a] beautifully written novel." —Los Angeles Times

“But underneath the privilege surges real pain, longing, and feeling in a way that makes it easy to imagine this novel as a film.”
—Publishers Weekly, starred review

"This sensitive, multifaceted novel creates an authentic portrayal of the ups and downs of life. . . . An absorbing Hollywood read." —Kirkus Reviews

"This is summer love for the ages."
—Booklist

Accolades for The Disenchantments:

"This is about the inside and outside of characters, the past and future of their lives—and it is astonishing." –Booklist, starred review

"A rich tapestry that will make readers confident that they are in the hands of a master storyteller. ... Hauntingly beautiful." –Kirkus Reviews, starred review

“Each roadtripper has his or her own artistic way of chronicling the individual journeys they are on together, and that introspection draws the reader into this intimate novel.” –NPR.org

"LaCour skillfully draws connections between art and life as she delves into the heart of her characters." –Publishers Weekly, starred review

"Enchanting in its depiction of the cusp of young disenchantment, this realistic novel will hit home with many thoughtful YAs.” –School Library Journal, starred review

"Hold Still may be the truest depiction of the aching, gaping hole left in the wake of a suicide that I've ever read. But it's anything but depressing and gloomy—it’s also about the tender shoots of new relationships that grow unexpectedly out of tragedy. A haunting and hopeful book about loss, love, and redeption." –Gayle Forman, author of If I Stay

"A beautifully written, gently moving account of a long goodbye that will resonate with anyone who has ever had to let go before they were ready." –Sara Zarr, author of Once Was Lost

"A poignant and beautifully crafted depiction about the grief that a person goes through after a profound loss.... A fresh voice to the world of young adult literature." -–VOYA, starred review