The King and the Catholics: England, Ireland, and the Fight for Religious Freedom, 1780-1829 (Paperback) 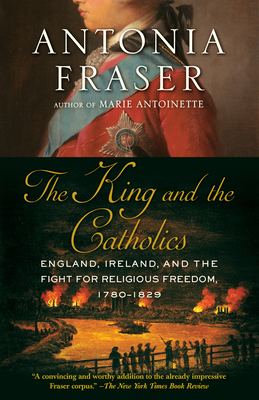 By Antonia Fraser
Email or call for price.
Special Order

In the eighteenth century, the Catholics of England lacked many basic freedoms under the law: they could not serve in political office, buy or inherit land, or be married by the rites of their own religion. So virulent was the sentiment against Catholics that, in 1780, violent riots erupted in London—incited by the anti-Papist Lord George Gordon—in response to the Act for Relief that had been passed to loosen some of these restrictions.

The Gordon Riots marked a crucial turning point in the fight for Catholic emancipation. Over the next fifty years, factions battled to reform the laws of the land. Kings George III and George IV refused to address the “Catholic Question,” even when pressed by their prime ministers. But in 1829, through the dogged work of charismatic Irish lawyer Daniel O’Connell and the support of the great Duke of Wellington, the watershed Roman Catholic Relief Act finally passed, opening the door to the radical transformation of the Victorian age. Gripping, spirited, and incisive, The King and the Catholics is character-driven narrative history at its best, reflecting the dire consequences of state-sanctioned oppression—and showing how sustained political action can triumph over injustice.

Antonia Fraser is the author of many internationally bestselling historical works, including Love and Louis XIV; Marie Antoinette, which was made into a film by Sofia Coppola; The Wives of Henry VIII; and Mary Queen of Scots. She is also the author of the memoirs Must You Go?, about her relationship with and marriage to the playwright Harold Pinter, and My History. She has received the Wolfson Prize for History, the Medlicott Medal awarded by Britain’s Historical Association, and the Franco-British Society’s Enid McLeod Literary Prize. She was made a Dame of the British Empire in 2011 and a Companion of Honour in 2018 for services to literature.

“[Fraser] tells the story with erudition, sprezzatura, and a tremendous sense of fun. Every page is shot through with humour and humanity.” —The Guardian

“[A] lively account . . . Fraser writes with verve and lightness of touch.” —The Wall Street Journal

“A splendid account of the struggle for Catholic emancipation . . . Fraser knows better than anybody how to make political and religious history fun . . . Her tale flows with such elegance and enthusiasm that you barely stop to notice just how skillfully she does it.” —The Sunday Times (London)

“Triumphant . . . The King and the Catholics explains, without ever obviously seeming to do so, how implacable prejudices and intractable issues can be tackled and overcome. In other words, it is that rarest of things: a good-news story.” —The Sunday Telegraph (London)

“This is an absolutely splendid book. With the brio and narrative skill which has been in evidence since her first book—the irreplaceable classic biography of Mary Queen of Scots—Fraser gives us a vivid account of Catholic Emancipation. Some of the most dramatic scenes in our parliamentary history are here brought to life with unmatched verve.” —The Spectator

“Fraser’s prose is a pleasure to read . . . Her book is the ideal introduction to the subject.” —The Daily Telegraph (London)

“As she has accomplished with so much modern British history, Fraser makes the story of the Catholic Question’s resolution riveting.” —Booklist

“A gripping telling of the struggle for Catholic rights in England and Ireland that is still relevant and will appeal to all who appreciate a good story about the fight for justice.” —Library Journal