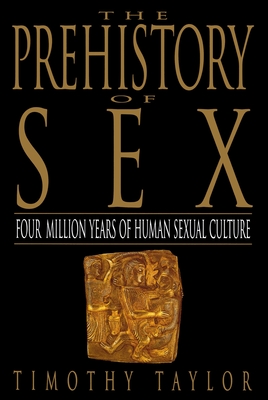 This lively and provocative book leaves no stone unturned and no taboo untouched as it pieces together evidence from highly controversial artifacts and human remains to decipher the mysteries of Stone Age sex. Archaeologist Timothy Taylor paints a dramatic and startling picture of our sexual evolution as he follows human sexuality from its origins four million years ago to modern times to answer our most titillating questions about this endlessly fascinating and
powerful subject.

Taylor draws on recent archaeological discoveries such as skeletons of Amazon women, golden penis sheaths, the charred remains of aphrodisiac herbs, and a
wealth of prehistoric erotic art to trace practices such as contraception, homosexuality, transsexuality, prostitution, sadomasochism, and bestiality back to their ancient origins. He makes the startling claim that although humans have used contraceptives from the very earliest times to separate sex from reproduction, techniques to maximize population growth were developed only when farming began--a revolution involving control of animals' sex lives, widespread oppression of women, and an attitude to nature that continues to have devastating ecological consequences. He draws the radical conclusion that the
evolution of our species has been shaped not only by the survival of the fittest but by the very sexual choices our ancestors made. And he links ancient sexuality with our own in a contemporary survey of artificial insemination, surrogate pregnancies, drag queens, brothels, pornography, and the spectre of racial dominance.

How has human sexuality changed--and how has it remained the same--over the span of millions of years? How did the ideas of eroticism, ecstasy, immortality, and beauty become linked to sex? Taylor explores these questions and sets out to prove that our sexual behavior is and has always been a matter
of choice rather than something genetically determined.  He eloquently and accessibly explains how our sexual politics--issues of gender and power,
control and exploitation--are not new but are deeply rooted in our prehistory.


Surely one of the most illuminating and controversial books on human sexuality ever written, The Prehistory of Sex invites readers to become voyeurs into the bizarre--and so far hidden--prehistoric sexual world.

Timothy Taylor is a lecturer in Archaeology at the University of Bradford in the United Kingdom. He has presented his work on Down to Earth in an episode that won the British Archaeological Award for best popular archaeology on television in 1991-92.  He has contributed numerous articles to Scientific American, Antiquity, and The Oxford Illustrated Prehistory of Europe.