The Violence: A Novel (Paperback) 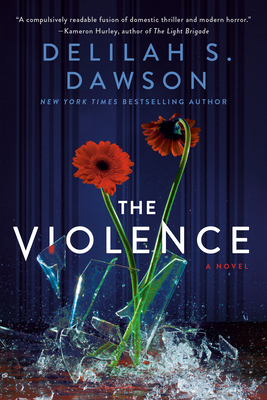 How far would you go to be free? Three generations of women forge a new path through an America torn by a mysterious wave of violence in this “chilling [and] dizzyingly effective” (The New York Times Book Review) novel of revenge, liberation, and triumph.

“A compulsively readable fusion of domestic thriller and modern horror.”—Kameron Hurley, author of The Light Brigade

“A novel that defines this era.”—Stephen Graham Jones, New York Times bestselling author of The Only Good Indians

ONE OF THE BEST BOOKS OF THE YEAR: The New York Times

They call it The Violence: a strange epidemic that causes the infected to experience sudden bursts of animalistic rage, with no provocation and no memory of their crimes. While it tears the nation apart, one woman sees something unlikely in the chaos—an opportunity.

Chelsea Martin has been a prisoner in her own home for too long. Her controlling husband has manipulated her for years, cutting her off from all support. Her narcissistic mother is no help, and her teen daughter is realizing she might be falling into the same trap when her once adoring boyfriend shows a dark side.

But when the Violence erupts, Chelsea creates a plan to liberate herself and her daughters once and for all.

What follows is a shocking and thrilling journey as three generations of women navigate a world in which they are finally empowered to fight back. Somewhere along the journey from her magazine-ready Tampa home to the professional wrestling ring, Chelsea becomes her own liberator, an avatar of revenge and hope, and a new heroine for a new world.

Delilah S. Dawson is the author of the New York Times bestseller Star Wars: Phasma, as well as Star Wars Galaxy's Edge: Black Spire, Mine, the Hit series, the Blud series, the creator-owned comics Ladycastle, Sparrowhawk, and Star Pig, and the Shadow series (written as Lila Bowen). With Kevin Hearne, she co-writes The Tales of Pell. She lives in Georgia with her family.

“Every summer needs a superb thriller, and this is it. A story of three generations of women making their way through an America ravaged by violence, this is also a wonderful narrative about liberation and perseverance.”—The Boston Globe

“Enthusiastically suggest to readers who enjoyed the table-turning feminism of Naomi Alderman’s The Power, the band-of-survivors theme in Emily St. John Mandel’s Station Eleven, and the emotional journey of Victor LaValle’s The Changeling.”—Booklist (starred review)

“A paean to the resilience of women . . . The Violence could not be more of-the-moment.”—Alma Katsu, author of The Hunger and The Deep

“A piercing examination of survival, courage, and self, terrifying and hopeful in equal measure.”—Peng Shepherd, award-winning author of The Book of M

“A gorgeously creative and surprisingly gleeful story about the way violence infects every aspect of American life.”—Sarah Langan, author of Good Neighbors

“The Violence is Dawson at her best: unflinching yet empathetic, the brutal and the gentle side by side, rage and despair tempered with joy and hope.”—Kevin Hearne, New York Times bestselling author of the Ink & Sigil series

“A compulsively readable fusion of domestic thriller and modern horror that shocks and surprises at every turn. A must-read!”—Kameron Hurley, author of The Light Brigade

“A staggering, masterful tale of survival and redemption during a literal epidemic of violence. Dawson is a storyteller working at the top of her class.”—Chuck Wendig, New York Times bestselling author of Wanderers

“Visceral, thrilling . . . A novel paced like a fistfight, aching like a just-gone tooth—but there’s hope in the harrowing.”—Max Gladstone, Hugo and Nebula award–winning author

“The Violence isn’t just a timely, ripping thriller—it’s an intimate, thoughtful, heart-wrenching portrait of abuse and power, and how those things ripple through generations.”—Rob Hart, author of The Warehouse