Please Don't Sit on My Bed in Your Outside Clothes: Essays (Paperback) 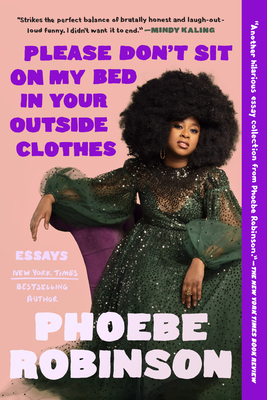 THE NATIONAL BESTSELLER, NOW IN PAPERBACK

“Strikes the perfect balance of brutally honest and laugh-out-loud funny. I didn’t want it to end.”—Mindy Kaling, New York Times bestselling author of Why Not Me?

With sharp, timely insight, pitch-perfect pop culture references, and her always unforgettable voice, New York Times bestselling author, comedian, actress, and producer Phoebe Robinson is back with her most must-read book yet.

In her brand-new collection, Phoebe shares stories that will make you laugh, but also plenty that will hit you in the heart and inspire a little bit of rage, and maybe a lot of action. That means revealing her perspective on performative allyship, white guilt, and what happens when white people take up space in cultural movements; exploring what it’s like to be a woman who doesn’t want kids living in a society where motherhood is the crowning achievement of a straight, cis woman’s life; and discussing how the dire state of mental health in America means that taking care of one’s psychological well-being—aka “self-care”—usually requires disposable money.

She also shares tales of her mom slowpoking before a visit with Mrs. Obama, the stupidly fake reassurances of zip-line attendants, her favorite things about dating a white person from the UK, and how the lack of Black women in leadership positions fueled her to become the Black lady-boss of her dreams. By turns perceptive, hilarious, and heartfelt, Please Don’t Sit on My Bed in Your Outside Clothes is not only a brilliant look at our current cultural moment, it's also a collection that will stay with readers for years to come.

Phoebe Robinson is a stand-up comedian, writer, producer, and actress. She is best known as the cocreator and costar of the hit podcast and series of TV specials 2 Dope Queens. She’s also the New York Times bestselling author of You Can’t Touch My Hair: And Other Things I Still Have to Explain and Everything’s Trash, But It’s Okay. Additionally, Phoebe has starred in the movies Ibiza and What Men Want, and was a moderator on Michelle Obama’s international Becoming book tour. Most recently, Phoebe launched Tiny Reparations, a production company under ABC Signature, whose first project is a talk show entitled Doing the Most with Phoebe Robinson, which premiered in April 2021 on Comedy Central.

Praise for Please Don't Sit on My Bed in Your Outside Clothes
“Phoebe Robinson has done it again! While exploring topics ranging from being the boss to helping me determine which wigs are my Zoom standbys, Pheebs keeps the comic relief coming. I’ve never looked forward to reading footnotes so much. Come for the laughs, stay for her vulnerability. You just might find yourself walking away lighter and braver.”
—Austin Channing Brown, New York Times bestselling author of I’m Still Here: Black Dignity in a World Made for Whiteness

“Phoebe’s the G.O.A.T. when it comes to honest and hilarious storytelling, and Please Don’t Sit on my Bed in Your Outside Clothes is no exception. Her writing is a MasterClass in transforming life’s most complicated parts into relatable gems. Righteous, ratchet, sincere, and downright entertaining, I couldn't put Please Don't Sit on My Bed down.”
—Hasan Minhaj, comedian, actor, producer

“She did it again! Whip-smart, laugh-out-loud, and unabashedly honest, this collection feels like a long-awaited weekend with an old friend. Phoebe brings you in with her hilarity, and keeps you with her unparalleled social commentary. After the past year, I needed this!”
—Abbi Jacobson, New York Times bestselling author of I Might Regret This: Essays, Drawings, Vulnerabilities, and Other Stuff

“Phoebe Robinson continues to be one of the most interesting, thoughtful, and hilarious writers of our generation. She’s so relatable and captivating and especially gifted at illustrating the ridiculous side of humanity comically while striking you right through your heart without you realizing it. Frankly, how dare she be this gifted and cool and hot? It’s disrespectful. F*ck her. I hate Phoebe Robinson.”
—Jameela Jamil, actress, author, activist

“A hilarious compilation of essays and advice, the comedienne, actress, and former cohost of the insanely popular stand-up and storytelling podcast 2 Dope Queens is going to have you thinking a little differently and more deeply, while cracking up at the same time.”
—Essence

“Phoebe Robinson’s Please Don’t Sit on My Bed in Your Outside Clothes is everything, in both the 'Girl, that outfit is everything!' sense and also in the fact that the free-flowing essay collection fits seamlessly into so many categories: earnest pandemic memoir; no-nonsense business guide; lovingly profane commentary on relationships, sex, and race; and unabashed celebration of Black culture, particularly Black women.”
—The Washington Post

“[Please Don’t Sit on My Bed in Your Outside Clothes] illuminates the comedian’s thoughts on a variety of topics, from the Black Lives Matter movement to COVID-19 quarantine to the decision she made not to have children. Throughout, Robinson is brutally honest and applies her humor in clever ways.”
—Time

“The 2 Dope Queens star returns with astute, hilarious essays on everything from performative allyship to her hair.”
—People

"[A] collection of stories told with humor and wisdom..."
—Oprah Daily

“An all-new, hilarious, and candid collection of essays.”
—Bustle

“Phoebe Robinson is as hilarious as ever in her third book. . . . Not only is the bestselling author’s work super funny, it’s also enlightening and thought-provoking.”
—BookPage

“Phoebe Robinson knows the world is upside down right now, but she's going to give you plenty of reasons to laugh anyway in her latest essay collection. . . . There's no topic Robinson is afraid to tackle with her trademark wit and incisive eye.”
—PopSugar, “Best New Books of September”

“A funny, heartfelt, joyful third book . . . Separately, Robinson’s hot takes on life mostly hold their own, but when taken together, they create a satisfying, hilarious tapestry.”
—Kirkus Reviews (starred review)

“Here, like in her previous books, Robinson’s writing feels like talking to an old friend. . . . Robinson has written her best book yet, and her relatable humor will have readers coming back for more.”
—Library Journal (starred review)

“Whether she’s sharing what she’s learned about being a boss, tossing out statistics on mental-health care, or revealing that she’s made great progress in loving her natural hair though the journey will probably never be over, Robinson’s writing style is all her own and readers will love her for it.”
—Booklist

“[Robinson's] no-holds-barred essays are deliciously confessional—no topic is deprived of caps lock or gushing footnotes. Robinson’s legions of fans are in for a treat.”
—Publishers Weekly