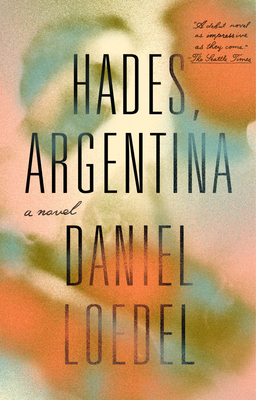 “Tender and politically evocative, Hades, Argentina is a beautiful portrait of grief and reflection. Loedel has created a breathtaking debut that examines the complexities of love and the way our memories betray us. This book will stay with me for a long time.”
— Cristina Rodriguez, Deep Vellum Books, Dallas, TX

“A debut novel as impressive as they come. Tough, wily, dreamlike.” —Seattle Times

A decade after fleeing for his life, a man is pulled back to Argentina by an undying love.

In 1976, Tomás Orilla is a medical student in Buenos Aires, where he has moved in hopes of reuniting with Isabel, a childhood crush. But the reckless passion that has long drawn him is leading Isabel ever deeper into the ranks of the insurgency fighting an increasingly oppressive regime. Tomás has always been willing to follow her anywhere, to do anything to prove himself. Yet what exactly is he proving, and at what cost to them both?

It will be years before a summons back arrives for Tomás, now living as Thomas Shore in New York. It isn’t a homecoming that awaits him, however, so much as an odyssey into the past, an encounter with the ghosts that lurk there, and a reckoning with the fatal gap between who he has become and who he once aspired to be. Raising profound questions about the sometimes impossible choices we make in the name of love, Hades, Argentina is a gripping, ingeniously narrated literary debut.

Daniel Loedel is a book editor based in Brooklyn. His first novel, Hades, Argentina, was inspired by his family history. It won the Prix du Premier Roman, was a finalist for the Prix Femina, and was longlisted for the Center for Fiction First Novel Prize.

“It is not always ‘us versus them.’ It is the ‘me versus me’ that plays out in individuals as they wrestle with what it means to do the right thing. . . . Loedel draws the line of complicity ever closer. . . . asking readers to consider at what point the witness becomes victimizer. . . . [He] continually works to erase the notion that only the evil commit evil acts, which adds to the horror. How do ‘ordinary men’ become instruments of a repressive state?” —Los Angeles Times

“This haunting historical novel . . . weaves betrayal and sacrifice so intricately that one cannot be disentangled from the other” —The New Yorker

“Elegant, searching. . . Amid echoes of the Orpheus myth and swirls of magic. . . . a descent into an underworld of memory and brutality.” —O, The Oprah Magazine

“A debut novel as impressive as they come. Tough, wily, dreamlike. . . The tangles of action, intention, and self-deception [Loedel] evokes are spellbinding in ways that will hit home in any society where democracy, the rule of law, and the very concept of the truth are in peril.” —The Seattle Times

“Powerful . . . The plain delicacy of Mr Loedel’s prose suits not only the horror of his subject, but also his novel’s risky premise. . . . hell is at once metaphor and setting, literary conceit and emotional reality. Tomás’s sojourn there is a fittingly moving tribute to the author’s sister and her many fellow victims.” —The Economist

“Surely one of the most astonishing debut novels of the year. . . . In scene after scene, Loedel is as masterful in his prose on love and heartache as he is unflinching in his descriptions of the torture applied to the perceived enemies of the regiment. . . . Like Virgil leading Dante through the furnace, Loedel’s narrative hand allows us to follow along without giving up our sense of hope.” —Interview

“Haunting. . . the heavy burden of memory and an urge to sever oneself from the past animates this powerful, evocative, and intelligent novel.” —Electric Literature

“[Loedel] reimagines the platitude ‘the personal is political’ by injecting enchantment and morality into one man’s entanglements with forces aligned against him. Hades, Argentina announces a major career, and we can expect great work from this gifted writer in the future.” —Harvard Review

“Weaving history and humanity, Loedel crafts a powerful and compelling narrative of a seemingly dystopian world that, unfortunately, was all too real.” —The Millions

“A complex and intimate meditation on love, guilt, and the decisions that haunt us forever.” —Kirkus Reviews (starred review)

“[A] haunting story about repression and the vulnerability of youth. . . A devastating reminder of the tragic costs of politics made personal.” —Booklist (starred review)

“An astonishingly powerful novel about the complex nature of guilt. It sets the personal against the political with real emotional accuracy and sharp narrative skill.” —Colm Tóibín, author of Brooklyn and Nora Webster

“A remarkable novel, as imaginatively bold as it is morally complex. It will stay with me for a very long time.” —Kamila Shamsie, author of Home Fire

“Deception, violence, a society on the brink, Hades, Argentina haunted me long after I turned the final page. Loedel is a writer of enormous talent.” —Elliot Ackerman, author of Red Dress in Black and White

“Hades, Argentina brilliantly explores the fault lines between heroism and complicity, guilt and trauma, and love and betrayal. Daniel Loedel has written a haunting and beautiful novel.” —Phil Klay, author of Redeployment

“A stunning descent into the haze of memory and history. In his interrogation of complicity and violence, Loedel explores how institutionalized evil disappears humans not only from the physical world, but from their own souls as well.” —Francisco Cantú, author of The Line Becomes A River

“Strange, gorgeous, and terrifying—a book for the grievers, and for those of us who wish we could turn back time to remedy past mistakes—and so, for all of us.” —R. O. Kwon, author of The Incendiaries

“A remarkable novel, personal and political, elegiac and intimate, with a tenderness and wisdom evident in every passage. A beautiful book.” —Dinaw Mengestu, author of All Our Names

“Loedel writes in the venerable Argentinian tradition of mixing the political and the supernatural, but his novel comes from a different language and a new sensibility. It took me to places I had never visited before.” —Juan Gabriel Vásquez, author of The Sound of Things Falling