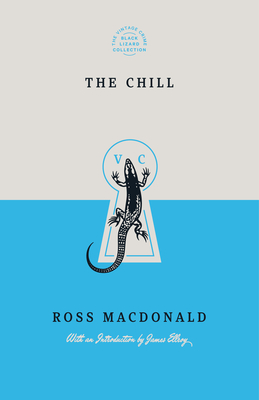 A special edition of The Chill by Ross Macdonald. Featuring an introduction by James Ellroy.

In The Chill a distraught young man hires private investigator Lew Archer to track down his runaway bride. But no sooner has he found Dolly Kincaid than Archer finds himself entangled in two murders, one twenty years old, the other so recent that the blood is still wet. What ensues is a detective novel of nerve-racking suspense, desperately believable characters, and one of the most intricate plots ever spun by an American crime writer.

Ross Macdonald's real name was Kenneth Millar. Born near San Francisco in 1915 and raised in Ontario, Canada, Millar returned to the U.S. as a young man and published his first novel in 1944. He served as the president of the Mystery Writers of America and was awarded their Grand Master Award as well as the Mystery Writers of Great Britain's Gold Dagger Award. He died in 1983.

"The American private eye, immortalized by Hammett, refined by Chandler, brought to its zenith by MacDonald." --The New York Times Book Review

"An entertainment of almost Byzantine complexity in which practically nothing is as the facts would seem. . . . Highly satisfactory." --The New Yorker

"Lew Archer . . . is a crime-fighter of the old school; painstakingly searching out the twisting thread of suspense that leads him from the hint of one complicated drama to another." --Christian Science Monitor