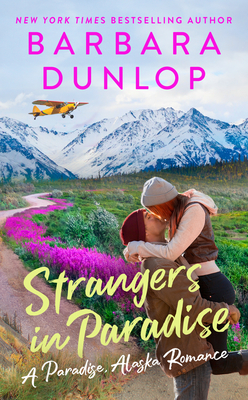 This is book number 3 in the A Paradise, Alaska Romance series.

A woman bush pilot in Alaska finds love where she least expects it in this new novel from New York Times bestselling author Barbara Dunlop.

Hailey Barosse always knew what her wealthy family expected of her: marry an affluent Georgia man, run a charitable organization, and provide her parents with two or three grandchildren. But Hailey rebelled. Instead, she moved far away from that suffocating life, and for six years she’s built her independence by flying bush planes in the tiny town of Paradise, Alaska. Then a suave, handsome businessman arrives, shaking up her world and reminding her of her controlling family. Parker Hall wants to invest in her boss’s airline, but Hailey doesn’t trust him at all. He might be confident and charming, but she knows all about self-centered cutthroat industrialists—and Parker is one of them.

Parker Hall prides himself on being a self-made entrepreneur. He earned his fortune by working day and night, expanding his gold mine and investing in new businesses that support his growing dream. His next opportunity is in Paradise, but his plans are quickly derailed by a fierce, beautiful pilot who both fights and fascinates him. The closer he gets to the feisty Hailey, the more she pushes him away. But Parker’s not giving up, not on Paradise and not on Hailey.  He’s come a long way in life by being laser-focused on his passions, and this time is no different…

Barbara Dunlop is a New York Times and USA Today bestselling author of more than sixty romance and romantic comedy novels. Brought up in a lively metropolis, she moved to the far north with her bush pilot husband, raising two children on the edge of a wilderness city. Barbara draws inspiration from the vibrant enthusiasm of her urban friends and from the independent spirit of her northern neighbors. Published in multiple languages across a worldwide market, her work has received numerous awards, and a number of her stories have been optioned for film and television.