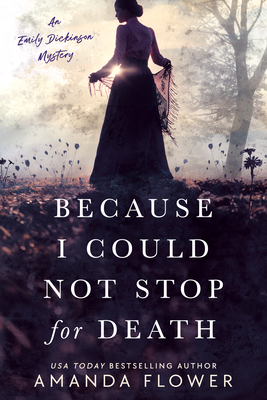 This is book number 1 in the An Emily Dickinson Mystery series.

Emily Dickinson and her housemaid, Willa Noble, realize there is nothing poetic about murder in this first book in an all-new series from USA Today bestselling and Agatha Award–winning author Amanda Flower.

January 1855 Willa Noble knew it was bad luck when it was pouring rain on the day of her ever-important job interview at the Dickinson home in Amherst, Massachusetts. When she arrived late, disheveled with her skirts sodden and filthy, she'd lost all hope of being hired for the position. As the housekeeper politely told her they'd be in touch, Willa started toward the door of the stately home only to be called back by the soft but strong voice of Emily Dickinson. What begins as tenuous employment turns to friendship as the reclusive poet takes Willa under her wing.

Tragedy soon strikes and Willa's beloved brother, Henry, is killed in a tragic accident at the town stables. With no other family and nowhere else to turn, Willa tells Emily about her brother’s death and why she believes it was no accident. Willa is convinced it was murder. Henry had been very secretive of late, only hinting to Willa that he'd found a way to earn money to take care of them both. Viewing it first as a puzzle to piece together, Emily offers to help, only to realize that she and Willa are caught in a deadly game of cat and mouse that reveals corruption in Amherst that is generations deep. Some very high-powered people will stop at nothing to keep their profitable secrets even if that means forever silencing Willa and her new mistress....

Amanda Flower is the USA Today bestselling and Agatha Award-winning mystery author of over forty novels, including the nationally bestselling Amish Candy Shop Mystery Series, Magical Bookshop Mysteries, and, written under the name Isabella Alan, the Amish Quilt Shop Mysteries. Flower is a former librarian, and she and her husband, a recording engineer, own a habitat farm and recording studio in Northeast Ohio.

“Because I Could Not Stop for Death is USA Today bestselling author Amanda Flower’s first foray into historical mystery, and she acquits herself beautifully. She brings beloved American poet Emily Dickinson to life in a nuanced portrayal, giving us glimpses of the brilliant literary mind at work, turning over ideas and phrases, even as she teams up with an able and sympathetic maid to solve a murder. Well-researched, richly textured, and skillfully plotted, readers will fall for Flower’s lyrical mystery—word, verse, and stanza.” –Anna Lee Huber, USA Today bestselling author of A Perilous Perspective

“Amanda Flower captures the culture of mid-19th century American society in the absorbing and well-written Because I Could Not Stop For Death. Flower adds her plotting and pacing skill to make this book hard to put down.”- Charles Todd, New York Times bestselling author of A Game of Fear

“A fascinating glimpse into the life of beloved poet Emily Dickinson as she and her maid solve a murder together. You will be delighted by this clever premise set in a little-explored historical time period.”--Victoria Thompson, USA Today bestselling author of Murder on Madison Square

“Historical context adds excitement to the twin mysteries of murder and the poet's hidden life.”-Kirkus

“Amanda Flower does an exemplary job of extrapolating from the real Ms. Dickinson’s life to construct a clever, socially-conscious historical mystery…It is a superlative effort, and entertaining to boot.”-Criminal Element

“[A] sprightly series launch…a good start to what could be a rich historical series.”—Publishers Weekly