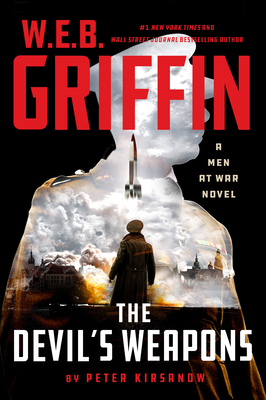 Dick Canidy and the agents of the OSS scour war torn Poland looking for a rocket scientist who holds the secrets to the Nazis most dangerous weapon in this new entry in W.E.B. Griffin's New York Times bestselling Men at War series.

April 1940. By terms of the Soviet Nazi Nonaggression pact, the two dictatorships divided the helpless nation of Poland. Now, the Russians are rounding up enemies of the state in their occupation zone, but one essential target slips away. Dr. Sebastian Kapsky had spent years working with Walter Riedel and Werner von Braun in the early days of rocket science, but as a man with a conscience he refused to continue when he saw the perversion of their work by the Nazis. That makes him the most knowledgeable person about German superweapons outside of Germany.

The Germans want him. The Soviets are desperate to grab him, but Wild Bill Donovan knows there's only one man who can find him in the middle of a war zone and get him out—Dick Canidy.

W. E. B. Griffin was the author of seven bestselling series: The Corps, Brotherhood of War, Badge of Honor, Men at War, Honor Bound, Presidential Agent, and Clandestine Operations. He passed away in February 2019.

Peter Kirsanow practices and teaches law and is an official of a federal agency. He is a former member of the National Labor Relations Board and has testified before Congress on a variety of matters, including the confirmations of five Supreme Court justices. He contributes regularly to  National Review, and his op-eds have appeared in newspapers ranging from The Wall Street Journal to The Washington Times. The author of Target Omega and Second Strike, he lives in Cleveland, Ohio.