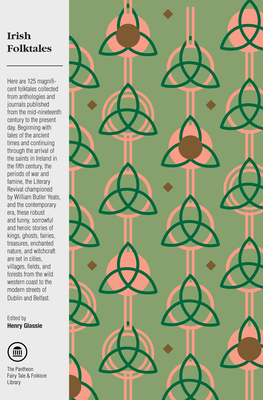 By Henry Glassie
$19.95
Email or call for price

Here are 125 magnificent folktales collected from anthologies and journals published from the mid-nineteenth century to the present day. Beginning with tales of the ancient times and continuing through the arrival of the saints in Ireland in the fifth century, the periods of war and family, the Literary Revival championed by William Butler Yeats, and the contemporary era, these robust and funny, sorrowful and heroic stories of kings, ghosts, fairies, treasures, enchanted nature, and witchcraft are set in cities, villages, fields, and forests from the wild western coast to the modern streets of Dublin and Belfast.

HENRY GLASSIE is a folklorist and emeritus College Professor of Folklore at Indiana University. He has written nearly twenty books on folklore of the areas of Ireland, Turkey, Bangladesh, and the United States, three of which have been named by The New York Times as "Notable Books of the Year."

Glassie served as the state folklorist for Pennsylvania, received a Guggenheim Fellowship, and was a president of the American Folklore Society and the Vernacular Architecture Forum. He was nominated to the National Council on the Humanities by President Bill Clinton on which he served in 2001.

"Delightful and informative, comfortable and full of wit and fancy. It reminds us why the Irish have been known as great storytellers for a millennium."
—Roger D. Abrahams, editor of African Folktales

"This latest volume of an already distinguished series maintains and even exceeds the high standards of the previous ones. The tales reveal the deep humanity of the Irish people; the commentary and notes reveal the humanity of Glassie. Very highly recommended."
— Library Journal