What My Girlfriend Doesn't Know (Hardcover) 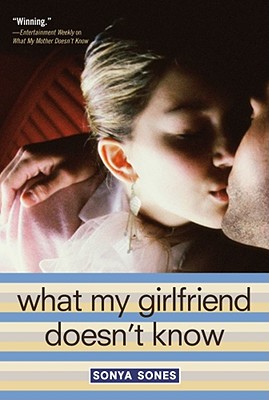 My name is Robin.

This book is about me.
It tells the story of what happens
when after almost 15 pathetic years of loserdom,
the girl of my dreams finally falls for me.

That seems like it would be
a good thing, right?
Only it turns out to be
a lot more complicated than that

Because I'm not gonna lie to you --
there are naked women involved.
Four of them, to be exact.
Though not in the way you might think.

Don't get me wrong -- my girlfriend's amazing.
But the way things have been going lately,
I'm starting to believe that the only thing worse
than not getting what you want,

Sonya Sones has written five YA novels-in-verse: To Be Perfectly Honest (A Novel Based on an Untrue Story), Stop Pretending, One of Those Hideous Books Where the Mother Dies, What My Mother Doesn’t Know, and its companion, What My Girlfriend Doesn’t Know. Her books have received many honors, including a Christopher Award, the Myra Cohn Livingston Poetry Award, and a Los Angeles Times Book Prize nomination. But the coolest honor she ever got was when What My Mother Doesn’t Know made it onto the American Library Association’s list of the Top 100 Most Banned Books of the Decade (to see why, see p.46). She lives near the beach in southern California, and only tells the occasional fib. Visit her at SonyaSones.com or follow @SonyaSones on Twitter.